Home » Mobiles » The Fall and Rise Of Motorola

The Fall and Rise Of Motorola

Motorola's life cycle has come a full circle, as it has re-emerged as one of the strong mobile brands. 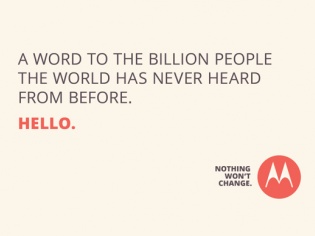 From being the innovators in the telecommunications division Motorola was overtaken by a few other newcomers and now once again they are on their way to regaining the old glory.

Over the years we are satisfied with the technology and build quality offered in products and remember they were the pioneers in introducing six sigma concepts to the world. They were the market leaders in setup boxes, modems, DVR, Semiconductors and Mobile phones for a long time.

Motorola entered the Indian smartphone market as early as 2000 in India, when Nokia was the market leader with Samsung, Pansonic, Sony, Siemens, Ericsson as the other competitors.

Till 2006 they were a strong contenders and launched some impressive phones like Moto RAZR, Pebble etc. But unlike the Koreans companies, Motorola didn’t embrace the Android OS and between 2009-12 they launched smartphones under the familiar names of RAZR, Defy and Droid. At the same time the companies slide had started in 2011.

The acquisition played a major role in the resurgence of the company and Motorola released their first phone under the name of Moto X in August 2013 offering variety of customizations. The biggest attraction was that the boxes were engraved with the stickers naming “Motorola-A Google company”.

In Moto X the company virtually changed the face of mobile market by offering high-end specs at low price tags and to some extent this created a confusion among Nexus fans. There were rumours that Google may shutdown Nexus division, while continuing with Motorola devices in future.

In yet another radical step, Motorola launched a Moto G, a $200 phone and was met with huge success all over the world. Especially in India it sold out like hotcakes, when it was launched through Indian ecommerce site Flipkart. A few days later Moto X too hit the Indian shores with a killer price tag.

Buoyed by the success of these two model, they launched Moto E at $120 and had a overwhelming response in India, not surprisingly this too was well received. While it revived companies fortunes it dealt a huge blow to the Indian brands like Micromax, Lava, Karbonn, Wickedleaks and Spice. Currently Motorola is working to launch Moto X+1 and Moto 360 and is showing all signs of getting back to the big league.

On January 2014 Google announced that Motorola is acquired by Chinese manufacturer Lenovo. This created a huge confusion among Motorola fans and the reason was unknown. This clarifies one thing that Nexus devices are safe.

This rise in popularity saw Lenovo showing interest in Motorola and eventually decided to acquire it. Even though the change of hands is yet to completed, Google surely revived one of the its fortunes.

In a way an trend-setting internet giant has managed to resurrect one of the iconic American brands, now can the Chinese build on it? Let us wait and watch.