After completely overlooking the affordable smartphone market for last couple of years, HTC has finally unveiled its affordable handset Desire 310 in India. Priced at Rs 10,000, this handset takes on the countless entry-level smartphones from the domestic manufacturers such as Micromax, Karbonn, and LAVA. Among the International brands, Nokia's Lumia 630 goes head-on with the Desire 310 as far as the specifications are concerned. The Desire 310 has landed in our office, and you can expect its review to go live in a next couple of days. Till then, here are the first impressions of the device.

With a 4.5-inch screen, the Desire 310 is a compact device, ideal for single-handed usage. The display packs in 854x480 pixels, which translates to around 220 ppi. Obviously, the display isn't very sharp. However, the bigger issue is with the colour reproduction. The screen looks washed out when compared to the similarly priced handsets such as the XOLO Q700S and Nokia Lumia 630. Design-wise the 310 is much like a successor of the Desire C, which was announced in 2012. The device's back looks as if it's made by some Sino-Indian brands such as Micromax and Karbonn. Much like the Desire 610, the new phone comes in blue, white, and red. To keep the manufacturing cost down, HTC has done away with the capacitive navigation keys. Instead of that, you get the on-screen buttons on this phone. On the right side, the handset sports a Volume Rocker and a Lock key. The 310 comes with 4 GB internal storage. Plus, you get a microSD card slot for storage expansion. Other features include a 5 megapixel camera, VGA front-facing snapper, dual-SIM functionality, and 2000 mAh battery. For this budget handset, HTC has chosen MediaTek over Qualcomm. The phone is powered by the MT6582M chipset. These SoCs are generally used by local brands due to the low-cost. However, their performance lacks consistency when compared to Qualcomm's offering. The 512 MB RAM doesn't help either. The Desire 310 stutters when swiping between the homescreens. This isn't surprising since Android is a memory hog that requires at least 1 GB RAM for smooth operation. The handset offers Android 4.2 (jelly Bean) out-of-the-box with Sense UI on top it. We haven’t fully tested the device yet, but till now the casual games are working fine. To gauge the performance, we ran a couple of synthetic benchmarks and here are the results. 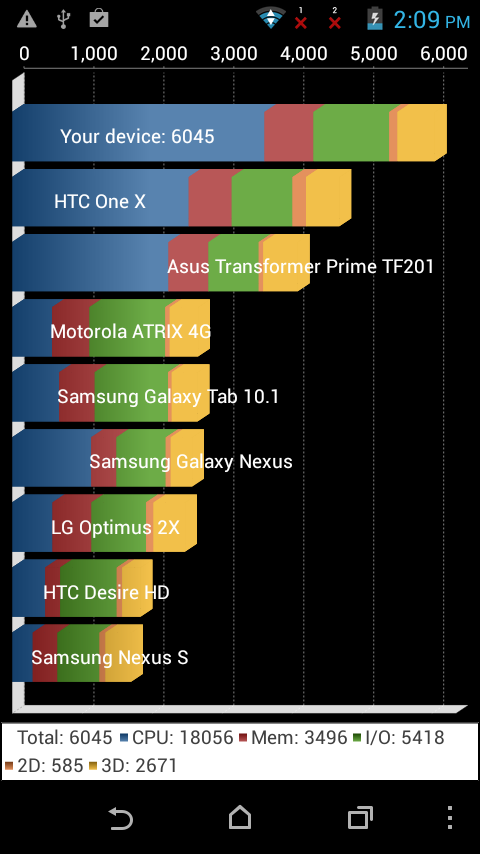