Here are some theories and fun-facts you ought to know before watching Interstellar. Warner Brothers studio recently released the first full trailer of Christopher Nolan's upcoming science fiction movie, Interstellar. Known mostly for the Batman trilogy, Nolan has directed many impressive flicks such as Following (1998), Insomnia (1998), and The Prestige (2006). Inception too was a box office success, but it doesn't qualify as a great sci-fi movie if you have already experienced the ambiguous ending of Solaris (2002) and shape shifting buildings in Alex Proyas' Dark City (1998). Interstellar is set to release in November. The movie's central idea revolves around the space wormhole. Also known as an Einstein–Rosen bridge, a wormhole is a hypothetical phenomenon that connects two distant locations. Theoretically, it can be used as a shortcut to travel vast distance in space. The most common analogy to explain it involves an apple and worm. Imagine a worm chew a hole from one end of an apple, travel through its centre, and emerge from the other end. For us, it’s one wasted app, but for science, he has managed to create a "shortcut" through the space. 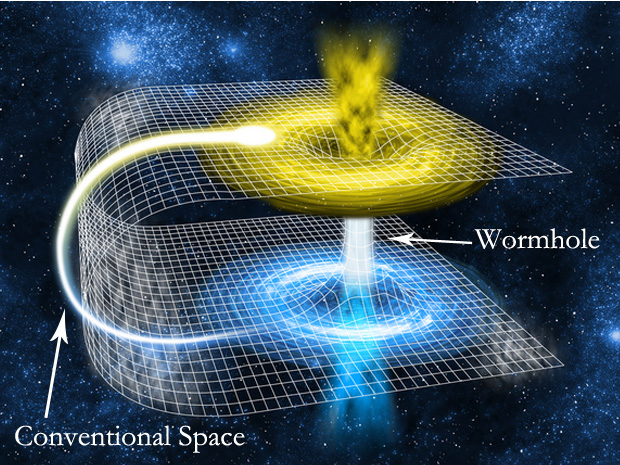 In the movie, a wormhole gets discovered, and a team of scientists set on a voyage to explorer it. Matthew McConaughey (True Detective fame), is a part of the space travellers crew. The trailer doesn't reveal many details about the story, but you do get a glimpse of a wormhole. You can also spot that Nolan's spacecraft looks very similar to Stanley Kubrick's space station seen in 1968's science fiction movie '2001: A Space Odyssey'. There’s nothing wrong in copying that design, because Torus-shaped spacecrafts are meant to simulate Earth-like gravity with the help of circular motion. Another thing worth mentioning is that the cryogenic pods (hibernation pods) in the movie sport a contemporary look rather than futuristic. For those not in the know, cryo-pod is a hypothetical equipment that can freeze and put a human being in hyper sleep. Such equipment has been featured in many sci-fi masterpieces such as Ridley Scott’s Alien (1979), Prometheus (2012), and Christian Alvart’s Panodorum (2009). Interstellar's trailer definitely looks impressive. With visual-effects supervisor, Paul Franklin on board, you’re guaranteed to get splendid visuals. Paul has previously worked on the Batman trilogy and Inception. We can't wait for November to watch this flick. Whether or not Nolan will manage to handle this topic well remains to be seen. For instance, Danny Boyle's Sunshine (2007) starts off very well, but turns into a mindless slasher film in the third act. One thing is for sure though that Interstellar will at least generate some much-needed interest about the space exploration in youth. Before signing off, don't forget to watch the trailer embedded below.