Home » Features » Guide: How To Get Facebook Timeline Before It's Launched

Guide: How To Get Facebook Timeline Before It&#039;s Launched | TechTree.com

Guide: How To Get Facebook Timeline Before It's Launched

Experience the Timeline feature before your friends by using this secret method. 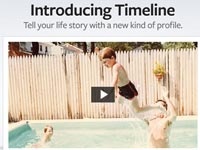 Facebook's f8 conference for developers is in full swing, and among the new features being prepared to be launched within a week, is an important one called Timeline. This is an interesting addition which will definitely become very popular. You can read about it here. However, the problem is that this feature is not yet available to normal users — only developers. Regardless, as the old saying goes: where there is a will, there is a way. In this tutorial, I will show you a "secret" way of getting the Timeline feature before it has been launched and made available to the general population. Since you have to be a developer to get it, we will make you one. Before we start though, make sure that your mobile number has been verified in your FB account.

Log into Facebook and search for the Developer app by typing "developer" in Facebook's search box. The first app that shows up is the app you need. Refer to the image below:

The app requires your permission to access certain basic information such as name, profile picture, gender, etc. Click on Allow to install the Developer app.

Once installed, the screen will appear as in the screenshot below. Click on Create New App to start creating an app.

The Developer app has been installed.

In order to convince FB that you really are a developer, even though you are not, you must create at least one app. There is nothing to worry about here because only the user can see what the app is about and FB does not care whether it even works or not. Once you click on the Create New App button on the top right, you will be presented with a screen as below. Enter the name of the app and the app namespace in lower case and click on Continue. Enter the correct characters in the security check screen and click Submit.

Create a fake app to convince FB that you're a "developer".

In the next page that appears, ignore everything and click on Open Graph link present on the left hand side.

Click the Open Graph link on the top left.

Since any app requires you to define an action to be performed and an object on which the action is to be performed, you specify a verb in the action field and some object name in the object field in this page. In this case, we have used "track" as the verb, and "satellite" as the object. However, you may fill in anything here because it doesn't really matter what you type in as long as the fields are filled. Click on Get Started to proceed.

Specify an action and an object on which the action is to be performed.

In the next step, ignore the fields and just click on Accept where applicable to get past the three steps of Edit your Action Type, Edit your Object Type, and Create an Aggregation.

Just click Accept where applicable to get past the three steps.

You will see a screen just like the one below.

Congratulations! You are now officially an FB "developer". As part of the special privileges privy only to FB developers, you can now access the Timeline feature. Go to the URL http://www.facebook.com/YOURFBID?sk=timeline, where YOURFBID is to be replaced by your FB ID. In the page that opens, you will be introduced to the Timeline feature. Click Get It Now to start accessing Timeline.

You can now click on Start Tour to get information about this new feature. After you review what you want to hide or add, you can click on Publish Now to make your Timeline live. Since it is a developer-only release, your Timeline will be visible only to other developers and not to the normal user.

You can now start using the Timeline.

Your Timeline will become visible to everyone only from 30th Sep, 2011.