Home » Internet » The Rise Of Live TV, Fall Of Sanity?

The Rise Of Live TV, Fall Of Sanity? | TechTree.com

The Rise Of Live TV, Fall Of Sanity?

We look at the Everywhere TV offering from Tata Sky. 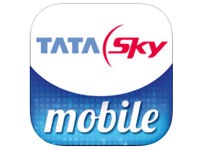 Televisions have been a big part of people's lives, and their homes. In fact in one of the episodes of the popular American season Friends, Joey actually asks, "You don't have a TV? Well then what does all of your furniture point at?" With the advent of faster internet connectivity options, smarter phones, and live TV apps, users don’t really have to sit in front of their TV sets to catch their favourite shows. However, most of these apps don’t really offer realtime telecast of shows. That is what Tata Sky claims to set their app apart. The DTH service provider has recently unveiled its Everywhere TV app for the iOS Platform, and the nice people at Tata Sky gave us a quick demo of how the app works, and what's in store for its subscribers.

Whom Is It For?
The app is available for free on the iTunes app store only, so for starters, this will work with any of the iDevices. But then again, you need have an active Tata Sky subscription (on your TV) for this to even start up. The service provider explains that since they are listed as DTH (direct-to-home) player, it goes against their contractual obligations; the service cannot be extended to other users yet. If they manage to get the required permissions, then the app may be open to public. While the app is free, the service certainly isn't. You will have to fork out a monthly fee of Rs 60 to get it up and running. Tata Sky assures you that irrespective of your connecting speeds, you will get live streaming, simply because the streaming bandwidth intelligently manages whether you are using 2G, 3G, 4G, or Wi-Fi connectivity to use the app. Click here to download the app.

What Does It Do?
Well, like the name suggests, it gives you access to your favourite TV shows anywhere you go, depending on what you subscribe to via your set top box. So if you have subscribed to any radio channels via Tata Sky that will also be available via your mobile phone app. You can even download pay-per-view movies on to your handset for offline viewing, but then again, this is also time bound. After the expiry date, the movie will not play. Same goes for recorded shows. 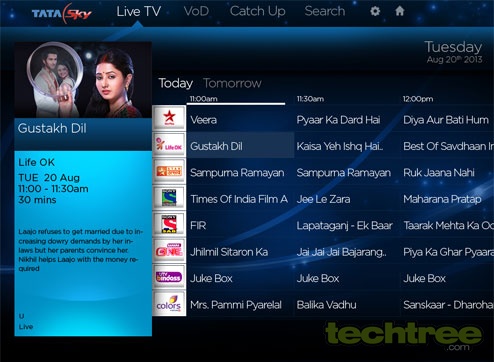 What Does It Give You?
A four-day program guide, so that you'd know what channel airs which show at what time. Currently, the app offers only 54 channels, but the company promises more will be added in the future. You can set timers via your mobile phone, and even remotely record shows via your set top box. You can not only watch Live TV, but also pause and fast forward shows up to 5 minutes. Plus, if you have missed out on any of your favourite shows, you get access to episodes that are as many as 5-day old via Catch-up TV. Tata Sky HD PVR subscribers also get access to over 2000 videos offline, which is again a time-bound access. Restrictions
Apart from the DRM-ness, the app has a few limitations. Firstly, it does not support output via HDMI-out to any larger screen. Secondly the app is available only for iOS 5.1 and above, and doesn’t work on jail-broken devices either. While there are talks for an Android app, and the company is contemplating over adding Windows Phone to its app listing too, the brand isn't enthusiastic about an app BlackBerry devices. While the app sounds interesting, and the service worked quite well at the demo session, the service faces stiff completion from the likes of players such as nexGTv and ZengaTV, which give access to cricket matches as they happen. However, if you are the kinds who would not want to miss people screaming their lungs off at each other every night on Bigg Boss on your arduous train journey to home/work, this is exciting stuff!