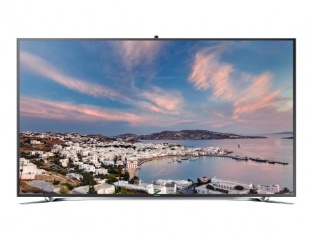 The Samsung UA55F9000 costs Rs 3,30,000. That's a lot of money for a television set. I can't even think of buying one unless I'm willing to sell a kidney and ship my kids off to Sivakasi. That isn't possible either, since I don't have any kids. This TV is so exclusive that most of us can't afford it even in a hypothesis. So what exactly does this TV have that can justify a sticker price that's more expensive than—not one but—two Tata Nanos and 43-inch plasma TV combined?

Ultra Expensive
For starters, this isn't your average television set. Its LED-backlit LCD panel sports pixel dimensions of 3820 x 2160, which is also known as Ultra HD or 4K. For the same screen size, a 4K UHD TV gives you exactly four times as much resolution as a Full HD TV. Shockingly, this isn't what makes the Samsung UHD TV better than your now old-fashioned Full HD clunker. That's something we will get back to later, but let's move on to what makes this TV exclusive. The F9000 looks absolutely gorgeous. The large 55-inch panel is surrounded by an understated black bezel with a thin chrome lining. The chassis employs high quality plastics all-round; even at the rear, where no one's going to notice it. At 3.8 cm, the TV isn't exactly ultra-slim. However, shaving a few odd millimetres makes more sense in a mobile phone than a monstrously large television set. The all-metal, crescent-shaped stand is sturdy and is the least wobbly TV support I have witnessed in a long time.

Innovative Features
It's not just about shoving in expensive materials to justify the price tag. The Samsung F9000 UHD TV incorporates some clever features as well. The best one being One Connect. It's a heavy yet sleek rectangular box that houses all the HDMI, component, composite, optical, and Ethernet ports, in addition to the quad-core SOC that powers all the Smart TV features. This nifty box makes the TV extremely wall-mount friendly. Now you have just one Display Port-like cable running from the TV to the box. Swapping cables and connecting sources to the TV therefore doesn't involve fumbling blind behind the chassis anymore.

Upgrading is as easy as swapping the One Connect module, if and when Samsung shifts to an octa-core smart TV hardware for next year's range. That's pretty smart if you ask me. Speaking of smart TV features, the UHD packs in a camera as well as a microphone. That means you get swanky voice recognition and gesture controls that let you operate the TV with your hands, Minority Report style. The ten-odd minutes I spent wrangling with the voice and gesture control features were enough to indicate that Samsung may not have ironed out the kinks in the system launched earlier this year. However, I'll reserve my judgement for the final review. Apart from the apps, web browsing, video conferencing, 3D capability, and all the fancy features enabled by an even fancier touchscreen-toting and microphone-equipped smart remote controller, the Samsung UHD TV is also supposed to display gorgeous pictures. It's easy to forget the primary purpose of this TV when it's brimming with such a multitude of snazzy features. The picture quality was disappointing when I hooked it up to the PS3 and gaming rig. This is nothing out of the ordinary, because all TVs are configured to the awful overscan mode. All you need to do is enable 1:1 pixel direct mode, but the process differs from brand to brand.

More Pixels, More Pixellation
While switching on the pixel direct mode helped matters greatly, the picture quality wasn't as sharp as I expected. For a good reason too, because sending Full HD input to an Ultra HD TV means running it at non-native screen size. This is a bad idea in an LCD panel, because the picture quality is affected greatly. Needless to say, this was reflected in all the video games and Blu-ray movies that I tested on the Samsung UHD. In simple terms, the visual fidelity was much worse than the sublime 55-inch Panasonic Plasma TV that I had tested earlier. Does this mean the panel is actually worse than the Full HD version of the same TV? Not really. It's all down to feeding it with the right content, which happens to be 4K Ultra HD. Unfortunately, none of the current Blu-ray standards or even your streaming content is up to that task. Finding the right content then is a Herculean task. Even when you do succeed, that would still mean restricting your TV viewing to stuff that's available in Ultra HD instead of watching what you really want to. It's either that, or putting up with Full HD content that ends up looking worse on your expensive Ultra HD TV.

Having said that, keep your eyes peeled for a full review, where I'll put the TV through the paces with Ultra HD content and see what it can really do.