Home » Mobiles » Preview: Portronics Charge One – Power On The Go

Preview: Portronics Charge One – Power On The Go | TechTree.com

Preview: Portronics Charge One – Power On The Go

If you are perpetually tinkering with your smartphone or chatting on it, don’t leave home without this device! Other than banal differences between smartphones, there’s one thing almost all smartphone users dislike the most above all else, battery life or rather the lack of it. While battery technology has improved over the years, so has cramming a lot of electronics (which people don’t really need) and hundreds of open background apps (that people don’t use). All this conglomerates to only one thing, terrible battery life.

This is where large batteries slapped on to phones or phablets, such as is the case of Samsung Galaxy Note 3’s 3200 mAh one matter. However, not everyone has the luxury of buying an insanely expensive phablet with an OS that is deviously known to make even the best 8-core processors feel like 600 MHz single core puppies. And no it isn’t the cute reference we are going in for.

This brings us to an extra battery pack as a backup. Sure an extra phone battery itself can help, but that either means you turn off your phone to switch batteries, or you simply cannot with Unibody designs like iPhone5S or Nokia Lumia 1020.

Portronics Charge One aims to fill that gap with a 5200mah power bank as a backup by your side. And it does just that. It’s like having a secondary firearm by your side during a busy fire-fight of a day.

There are three positives that really go for Charge One’s design
1. Really small in size, easily fitting in the palm of the hand
2. Smooth round finish gives it a nice feel; no pointy edges to cut the hand or your pocket
3. It’s made of good quality, doesn’t at all feel cheap when holding it Really compact Charge One is

There is no ON/OFF button on the Charge One. As soon as you plug in a device like a smartphone to its short micro-USB cable, it begins to charge. 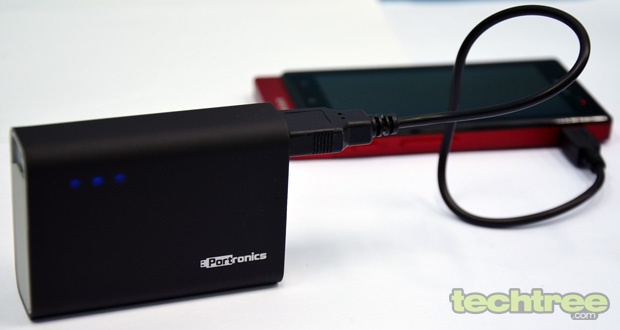 There are three blue colour LEDs that show how much charge is left in the Charge One. One LED light indicates you have less than 30% charge left on the Charge One, and its time to plug it in the wall socket. The Charge One doesn’t come with any other cable other than micro-USB. If you’d like to charge say a camera using mini-USB, you’ll need to use the camera’s cable itself plugged to this, as the other end is a standard full size USB header.

If there is one thing I do not like about the Charge One is that it takes almost as long as the USB charging time of your computer to charge your phone. That means you have the damn device dangling when talking on the phone, which gets quite awkward. Of course, you can detach it while taking a call if your phone is sufficiently charged by then.

All in all for Rs 1800, the Charge One is one device you wouldn’t want to be without if you are the kind that cannot stop tinkering/blabbering on the phone. You’ll love the “rescued feeling” that Charge One brings to the table with its massive 5200 mAh capacity. It is sufficient to charge a standard smartphone twice. What you will not like is bothering about another device to charge, and the fact that it's a bit of additional weight in your bag or your pocket, or worse dangling when talking on the phone.

For more details check out Portronics Charge One page. Other than the black colour, don't forget to check out some interesting colour combos before deciding on one.