Home » Internet » Mangalyaan In A Nutshell

Mangalyaan In A Nutshell | TechTree.com

Mangalyaan In A Nutshell

Here's a quick overview of India's mission to Mars. 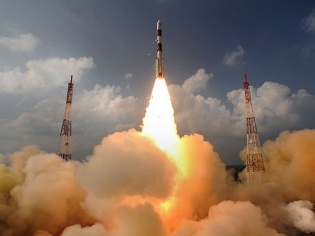 India's biggest space programme till date, the MOM (Mars Orbiter Mission) has been successfully launched from Shriharikota. In the media, this orbiter is being referred to as Mangalyaan, since it sounds a lot better than "MOM". The probe has been lift-off by India's very own PSLV C-25 rocket. During the mission, NASA will allow ISRO to use its deep space network based in Canberra, Australia.

With Mangalyaan, ISRO has become the fourth sixth organisation to commission a Mars programme. However, unlike NASA's Viking 1 (defunct), Viking 2 (defunct), Pathfinder (defunct), Spirit, Opportunity, and Curiosity, the Mangalyaan will not land on Mars. What makes it special though, is the fact that ISRO managed to keep the mission cost down to Rs 450 crores, while NASA's similar programme MAVEN (Mars Atmosphere and Volatile Evolution) will clock in at a whopping Rs 1170 crores. Considering that the distance between our planet and Mars is 400 million km, the cost of Mangalyaan expedition is slightly over 11 rupees per kilometre; or as some may point out, cheaper than what auto-rickshaws charge in Mumbai.

The Mangalyaan will remain in Earth's orbit till 1st December, when it will start its journey towards the red planet. If everything goes according to plan, the probe will reach the Martian orbit by 24th September.

The objective of the mission is to explore Mars' surface features, morphology, mineralogy, and atmosphere by using following onboard equipment:

LAP (Lyman Alpha Photometer)
LAP will be used to track the relative excess of hydrogen and deuterium in the the Martian atmosphere. This could lead to the understanding of loss of water on the fourth rock from the Sun.

MSM (Methane Sensor for Mars)
As its name suggests, the equipment is meant to measure the quantity of Methane in Mars' atmosphere.

MCC (Mars Colour Camera)
Will be used to determine the features, composition, and weather of Mars and its satellites, Phobos, and Deimos.

TIS (Thermal Infrared Imaging Spectrometer)
Will help us understand the mineralogy of the red planet.

The GSLV is a an improved version of the PSLV meant to carry greater loads. To put things in perspective, the PSLV can take the payload of around a ton, whereas GSLV can lift-off with upto 2 to 2.5 tones of equipment. The biggest difference between the them is PSLV can place satellites into sun-synchronous orbits. This means that the satellite passes over various countries during its routine. The GSLV on the other hand, launches satellites into geo-stationary orbit. In simple words, the satellite appears to be stationary to certain region on Earth. Hence, GSLVs are used for launching INSAT (Indian National Satellite System) type payload meant for communication purpose. For instance, Radio and Television broadcasting (DTH).

Now that the Mangalyaan is in our orbit, we will just have to sit back and wait for the initialisation of its next phase. We will get you more dope on the same shortly. Till then, we extend our best wishes for the biggest rocket that was launched from India this Diwali.