Home » Features » Is The New iPad Air Really A Breath Of Fresh Air?

Is The New iPad Air Really A Breath Of Fresh Air? | TechTree.com

Is The New iPad Air Really A Breath Of Fresh Air?

Find out how the iPad Air stacks up against its predecessor. 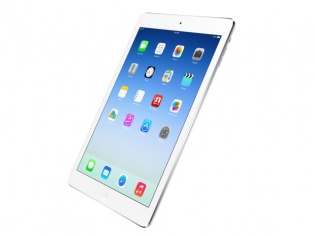 This year’s Apple iPad announcement was a lot more interesting compared to its previous events. After a long time, the Cupertino company not only upgraded the specs, but also made notable design changes. The iPads have been known for superior build, and in the latest iteration it seems to have got even better. Wondering how it stacks up against the current iPad (commonly referred to as iPad 4)? Here’s a quick comparison:

CPU Muscle
Similar to the iPhone 5S, the iPad Air boasts of the A7 chipset, which is claimed to be twice as powerful compared to the iPad 4’s A6X chip. The new 64-bit SoC will enable console-grade graphics on the new iPad. The new A7 has also got a companion processor M7, which is meant to offload motion data crunching work from the primary CPU. It’s quite obvious that the iPad Air’s performance will be much better than that of its predecessor.

Aesthetics
The latest iPad comes with significantly thinner bezel and has also shed some weight. A year of strict diet has brought down the iPad’s weight by 28 percent. To be precise it has reduced from 660 grams to around 470 grams. At 7.5 mm, it's one of the thinnest tablet in the market. Just like its predecessors, the iPad Air is made of aluminium, which separates it from the myriad of plasticky tablets from the Android camp. 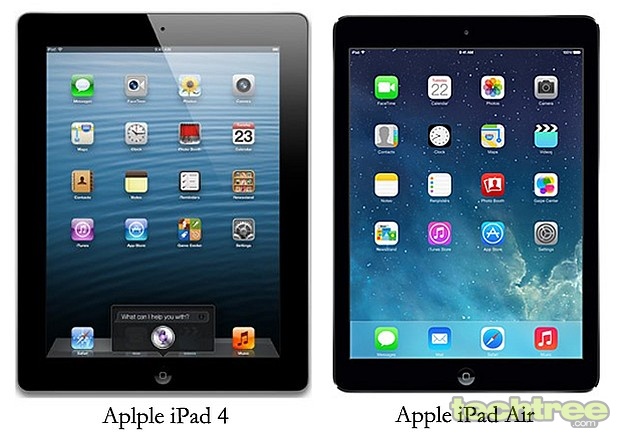 Screen
As expected, Apple has kept the slate's screen size intact. Similar to the previous iteration, the iPad Air sports an IPS screen with pixel dimensions of 1536x2048. Both the screens feature Scratch-resistant glass. Moreover, there’s an oleophobic coating, which gets rid of smudges. So basically, nothing has changed as far as the screen quality is concerned. But then, the Retina display is already impressive, so nothing to worry about.

Storage
Based on internal storage, both the iPad 4 and iPad Air comes in 16, 32, 64, and 128 GB versions. As usual, there’s no microSD card slot, and we’re sure Apple wouldn’t add that feature anytime soon. They have a couple of reasons for that: 1. Cheap cards can adversely affect the iPad’s performance. 2. There’s a better profit margin in 64 and 128 GB versions.

Camera
The cameras have mostly remained the same. You still get a 5 megapixel autofocus camera with features such as touch focus, face detection, and Geo-tagging. The only improvement we can find in the iPad Air camera is the addition of HDR mode. The quality of front-facing camera hasn’t changed either. Besides ‘selfies’, the 1.2 MP snapper is also capable of recording 720p videos.

So these were the key differences and similarities between the iPad Air and iPad 4. For more details, check out the specs comparison table.

So should one upgrade to the iPad Air? We will answer that question once we have the product in our hand. But going by it's specifications, and more importantly its toned physique, there is a high likelihood of we recommending it, especially for the first time iPad buyers or those stuck with an initial generation Apple or Android tablet.