Home » Games » When Bollywood Bizarrely Inspires Games… Or Not!

When Bollywood Bizarrely Inspires Games… Or Not! | TechTree.com

When Bollywood Bizarrely Inspires Games… Or Not!

Who inspires whom; we explore the chicken and egg situation. While the popular Hollywood (Canadian) actress Ellen Page gets miffed at Naughty Dog for naughtily copying her likeness in the hit console game 'The Last of Us', we wonder whether game developers are truly inspired by our Indian Bollywood actors/actresses too. Or is it the other way around given that Bollywood loves to ape their Western counterparts. Let's have a look at some obvious few, some bizarre, while others downright ridiculous.

Max Payne & Fardeen Khan
Remedy Entertainment that came up with Max Payne back in 2001 were looking for a new inspiration for their lead character. Remedy didn't want to go with the cliché of using a Keanu Reeves lookalike fearing a lawsuit, especially since they had practically borrowed the entire Bullet-time action sequences from 'The Matrix'. So they looked far...far (South) East where they seemed to have found an inspiration from a very unlikely source. 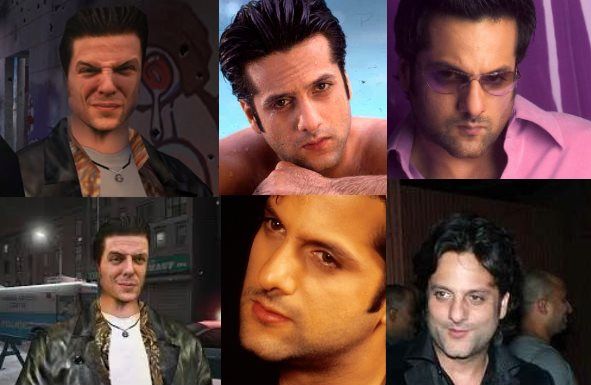 Carmageddon & Sanjay Dutt
Now this where it gets really weird. The look of Sanjay Dutt's character, the evil antagonist 'Kancha Cheena' in Bollywood's 2012 remake of Agneepath is heavily inspired by the famous 1997 violent pedestrian killing game Carmageddon. If you compare the images, and Sanjay Dutt's colourful life, it may not seem as uncanny after all.

Dhalsim & Amrish Puri
Inspirations can come from various sources, and the character Dhalsim from Street fighter is no exception. The long stretchable limbed and fire breathing character of Dhalsim is certainly most inspired by Indian Sadhus possessing mystical “Yogic powers”. The closest match to this is our favourite ('sort-of Kratos-like looking') baddie Amrish Puri as Mola Ram in 1984's Indiana Jones and the Temple of Doom. Chronologically this makes sense as Street Fighter series arrived in 1987 with Dhalsim arriving much later in the series.

We are dead sure that the most famous Indian, Mahatma Gandhi, had a lot to do with how Dhalsim got his slim limbs and overall Spartan looks. So much so, that Street Fighter IV actually has a skin resembling “The father of our nation”. Too bad the creators weren't inspired by Gandhiji's famous philosophy of 'Ahimsa' (non-violence) in a violent beat-em-up game; now that would have been certainly interesting! 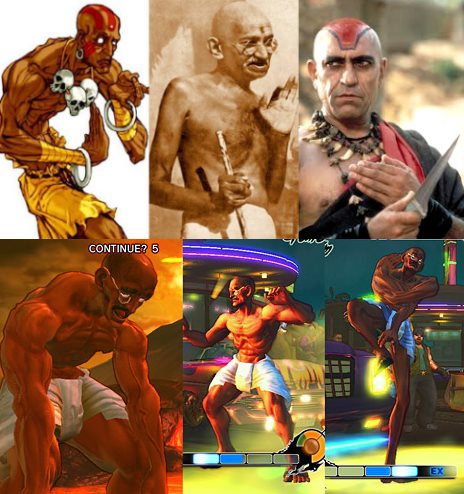 Contra & Sunny Deol
Back when Sunny was a young aspiring actor, he would have watched a lot of action movies like Rambo and played a lot of games like Contra. Contra (1987) was nothing but an “inspired” version of Rambo (1982) (and Commando, 1985) with a topless guy with a bandana, running and killing everything that moves without running out of ammo. Our desi Rambo, very keen on replicating toughness of Hollywood and homely Bollywood masculine desi-ness of Dharmendra Papa, sported the look in the movie Ghayal in 1990. And the rest as we know is history... which simply keeps relentlessly repeating itself.

Tomb Raider & Our Desi Femmes Fatales
“Imitation is the sincerest form of flattery” and Bollywood knows this a little too well. Here we have the famous female protagonist Lara Croft from Tomb Raider series (1996) being imitated by our very own desi babes. Who looks better? We leave it to you. But seriously Priyanka Chopra as Kill Bill with a sword strategically placed in the middle of her...ugh... isn't even remotely appealing. Too wannabe for our taste! Ra. One & Shah Rukh Khan
Ra. One or officially known as “Random Access One” (2011) is as random a movie as Shah Rukh Khan's (SRK) previous hit wonders. Game characters are known to have not very appealing faces due to limited budgets, sparse polygons or plain creativity diarrhoea . Not surprisingly, SRK triumphs all these not only in movies but also in his nostril flaring accurate polygonal depiction as G. One in a PS2 game. 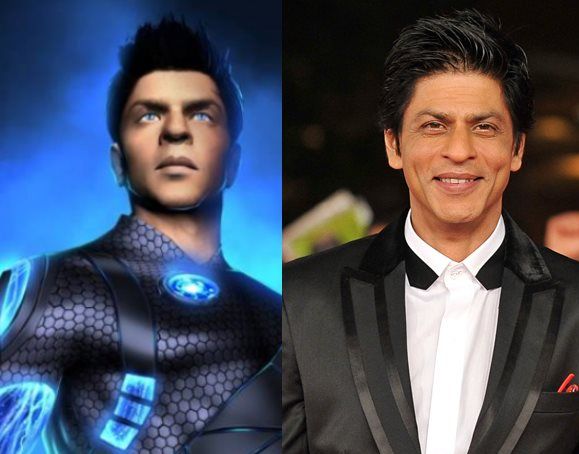 "Oh my Granny, what big teeth nose you have got!"

Some how the goat has more appeal and use. Featured right - Trigger First game screenshot
Image Courtsey - Fun2video.com

I'm sure we must've missed out on some of your favourite stars and game characters. Do send us your suggestions and links to images that you feel are worth sharing. Till next time, Happy Reading!