A quick look at the latest offerings from Bose that they unveiled in India this week. Bose, a lifestyle audio brand, has unveiled a bunch of new products, and some in the wireless audio segment in which it did not ply its trade previously. A couple of the new launches seemed quite innovative and unique. While the retail stocks will still take a few weeks to reach the Indian shores, let’s take a quick look at the new range.

Bose AE2w Headphones
These are Bose's first stereo Bluetooth wireless headphones. The AE2w around-ear headphones are comfortable to wear and let you enjoy your favorite movies, videos, and music from an iPad or other mobile Bluetooth devices that support A2DP for prolonged period. These headphones maintain the comfort and lightweight fit of Bose's AE2 and AE2i headphones with similar soft cushion materials. Also, Bose claims that the detachable battery-powered Bluetooth module on the left ear-cup weighs no more than the cable it replaces. I tried these on and they felt quite comfortable. Incidentally, their wired predecessor, the AE2 was at hand too for a quick comparison. Bose's claim of the similarity in overall weight seemed to be true as both headphones felt equally light and comfortable. While their sound quality was also equally impressive on certain music tracks available at my disposal, I would like to hold back my judgment till we test those out thoroughly in our labs. 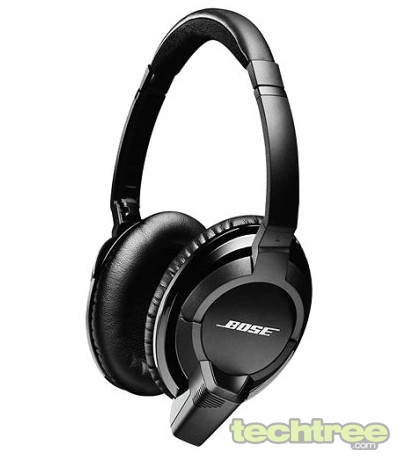 A device can be paired with these by simply pressing two buttons on the headphones' Bluetooth module, and up to two sources can be connected simultaneously. The wireless signal is expected to work up to 30 feet from the device and an integrated rechargeable battery provides around 7 hours of listening, or over 200 hours in standby mode on a single charge. If the battery power runs out, or there is no Bluetooth connectivity, a bundled audio cable turns them into a wired headphone.
The AE2w headphones charge via a USB cable, and LED and audio indicators provide power, battery life and connection status. When using with an Apple iOS device, an iOS battery meter displays the battery level of the headphones on the source device itself.

The Bose AE2w Bluetooth headphones will be available in Black (color) for Rs 19,013.

Bose QuietComfort 20 In-ear Monitors with Mic
These are the first in-ear noise cancelling headphones from Bose. These appear different from other IEMs at first sight because of their hook-shaped ear tips made of silicon rubber that hang on to the outer ear to make sure that they don't fall off even while you are rushing somewhere. The front of these ear tips are shaped like a small funnel to gently seal off the ear canal away from the noise around the user.

They offer two ways to listen — one to shut out the outer world, and one to keep you connected with the ambience. There are two tiny microphones in each ear bud — one senses the sound approaching, the other measures the sound inside. The measurements are then sent to a digital electronic chip located in the control module found on the headphone cord, which in turn calculates an equal and opposite noise cancellation signal within a millisecond and cuts the chaos outside. Long story short, they cut the ambient noise and let you focus solely on the music being played through them. Noise isolation headphones can be quite dangerous when walking on the road or crossing it. In such scenarios, it makes more sense to be aware of the surroundings than be lost in music. This is where the second way to listen steps in. With the push of a button on the inline remote, the QC20 headphones can be switched to Aware mode, which keeps the music playing, but allows the surroundings to be heard clearly; good examples would be a horn blaring or gate announcement at the train or airport. A built-in rechargeable battery provides about 16 hours of power. When the battery is depleted or the power is turned off, they function as standard in-ear monitors without the Noise Cancellation or Aware mode.

The Bose QuietComfort 20 include an integrated inline microphone and controls that allow you to take calls. They are available in two different models — the QC20 headphones work with most Android, Windows Phone, and BlackBerry smartphones, while the QC20i headphones are designed specifically for select Apple iPhone, iPad, and iPod models. Both the models will be available for Rs 22,388 in India by September 2013.

Bose SoundLink Mini Bluetooth Speaker
This new member of Bose's SoundLink family fits in the palm of your hand, and connects wirelessly to a smart device or tablet via Bluetooth. It weighs 680 grams (almost the same as an iPad) and measures just 2" (H) x 7" (W) x 2.3" (D). I won't exactly call it pocketable (unless you have deep pockets, which you will need anyway to buy these products) but is highly portable. For those who are familiar with the original SoundLink Mobile speaker from the same company, this one is less than a third of the size and half the weight of that. With its anodized aluminum housing, it should resist scratches and fingerprints pretty well. The SoundLink Mini speaker works with any device that supports Bluetooth A2DP. It's easy to pair and connects to a mobile device at the touch of a button on the speaker's control panel. The six most recently paired Bluetooth devices are stored in memory, eliminating the need to pair again. It has a rechargeable lithium-ion battery that is expected to provide up to seven hours of playback. While it can be charged directly via the bundled charger, a charging cradle is also provided that lets you conveniently place the speaker upon it for charging. Accessories in the form of soft covers in orange, green, and blue, and a travel bag, are also available but need to be purchased separately. 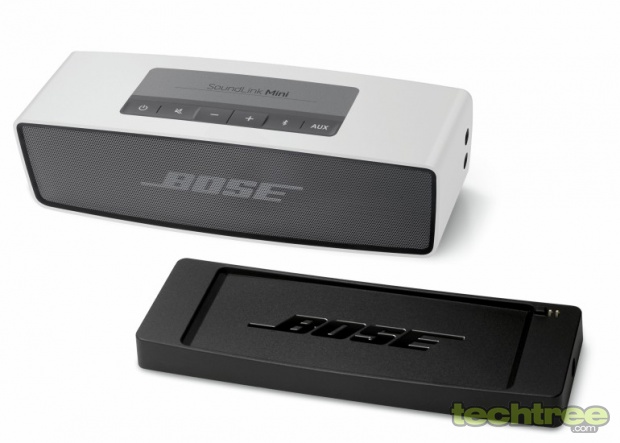 These portable speakers sounded remarkably well for their size. Of course, you don’t get the bass that one expects from a proper 2.1 channel speaker set. But for its small footprint, the sound is quite punchy and clear even at high volumes, and they were much louder than what I expected them to be. Mind you, if you intend to host a mini rock or metal concert at your place, you may be in for a disappointment.

The Bose SoundLink Mini, which is priced at Rs 16,200, will be available along with its accessories in India by first week of August 2013.