Microsoft Windows 8.1: What To Expect

A lowdown on the new features and improvements of the updated Microsoft OS. 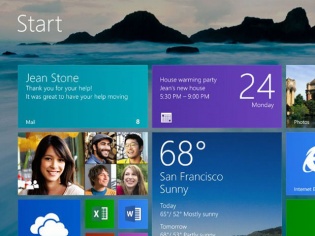 When Microsoft launched Windows 8, it was a huge leap over Windows 7 because it changed the way users were required to interact with the OS and get their work done. The most radical changes were the inclusion of touch as an input method on par in terms of importance with the previously used keyboard and mouse. Also, the Start button and menu were gone, replaced by the Start screen and the UI was made similar to that of Windows Phone OS. Instead of programs, apps were prominently featured with a dedicated Windows Store to get them from. It was indeed the success of touchscreen devices and the enthusiasm shown by the general public in the tile UI approach of Windows Phone devices that prompted Microsoft to make these bold moves. While some may complain about the learning curve, we didn't really find it difficult to adapt to this new OS. The company has now officially announced Windows 8.1 update to the OS. Let's see if there are enough new things that will make it a worthwhile upgrade.

Microsoft has incorporated a number of changes and improvements into Windows 8.1. Let's take a look at a few cosmetic ones first that comprise personalisation.

Customisable Lock And Home Screens
Moving away from its rigid stance of not allowing any customisation in the lock screen or tiles by the user, Windows 8.1 will let users use their own backgrounds for the lock screen and even the home screen (also called the Start screen). Pictures from local storage or SkyDrive can be used for this. Users can even take pictures with the built-in camera from the lock screen without logging in. Additionally, more colours will be available for the Start screen than before. Resizeable Tiles
Just like in Windows Phone, tiles in Windows 8.1 now support three different sizes and can be resized accordingly. The user can then arrange and organise them as per his/her requirements and even name groups. It is possible to select multiple apps at a time to resize, rearrange, or uninstall them together. Pressing and holding tiles will let you move them around.

Swiping from the bottom will let you view all apps and it is now possible to filter apps by name, date of installation, usage, or category. In Windows 8, app icons used to get dumped to the Start screen once an app was installed. However, these now appear under apps view as mentioned earlier, with the newly installed app marked as "new". You can choose which of these should appear on the Start screen.

Better Search
Search charm will now provide global search results using Bing in a rich and easy-to-read side-scrolling result page comprising results from various sources including the web, apps, files, and SkyDrive. Various user actions can then be initiated as the next step.

Improved Built-in Apps
There will be improvement in the built-in apps. As an example, the Photos app will have additional editing features that will let you quickly edit or adjust photos while viewing them in the app or even as you view them in other places such as Mail, SkyDrive, or Camera. Similarly, the Music app has been improved to help pick and play music from your collection.

Improved Multi-App Usage
Multiple apps can now be used in a better way with variable and continuous size of snap views. Apps can be resized to any size, a screen can be shared between two app, or even three if multiple displays are connected. When multiple monitors are connected, each display can have an app running with the Start screen running on one to make multi-tasking easier. In a way similar to how two IE windows can be snapped together, multiple windows of the same app can also be snapped together. Improved Windows Store
Windows Store in Windows 8.1 will show more detailed info about apps than before. It will include detailed list of top free apps, new releases, and picks for you. Similarly, there will be a list of related apps nearby to help with app discovery.

Cloud Connectivity
Windows 8 allowed you to save files directly to SkyDrive so that they would always be accessible to you as long as you have internet access. Now personalisation settings can also be stored in the cloud and your Windows 8.1 device automatically receives these settings once you log in. Updated PC Settings
PC Settings has been updated in Windows 8.1 to give access to settings such as display resolution, power options, make and model of the PC, change product key, Windows Update, or join a domain, by not having to go to the Control Panel. SkyDrive settings can also be managed from here and you can view the amount of storage available.

Internet Explorer 11
Windows 8.1 will bring IE 11. This browser will offer better touch performance, faster page loading, and more such improved features. You can also customise its appearance of modern IE11 to show the address bar and open as many tabs as you desire. Open tabs are synced across different Windows 8.1 devices with the same login.

Improved Mouse And Keyboard Options
While Microsoft increased the importance and dependence on the touch interface in Windows 8, it will include several improvements in handling non-touch devices for easier navigation through moue and keyboard. While it was rumoured that the Start Button is set to reappear in Windows 8.1, this is true in some ways. While it will not be outright visible, the familiar Windows logo will appear once you move your mouse cursor to the lower left and let you do everything that you used to do with the Start Button in Windows 7. It is also possible to customise the functions of each corner and you can even opt to boot into alternate screens, such as your PC can boot directly into the Apps view screen instead of the Start screen.

These are some of the new features that will be available in the Windows 8.1 update. A preview of this update will be rolled out from 26th June in conjunction with Microsoft's Build event. The update will be available as a free download and users will be notified once it is available. Users can then check if it suits them and decide whether it is worth an upgrade when the retail version is released in the coming months.