Home » Features » TechTree Blog: All Your Content Are Belong To Sibal!

TechTree Blog: All Your Content Are Belong To Sibal! | TechTree.com

TechTree Blog: All Your Content Are Belong To Sibal!

Government proposes move to screen user content before it's published on the web. 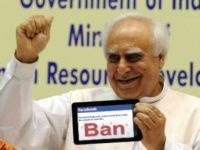 The Union Telecom Minister, Kapil Sibal, has asked Facebook, Google, Microsoft, and Yahoo! to pre-screen the content generated by Indian users. In yesterday's press conference, he stated that the government needs to take measures to prevent "blasphemous" and "defamatory" material from being circulated on social networking sites.

It's been said that Sibal was particularly unhappy over a series of online jokes targeting Sonia Gandhi and other senior leaders of the Congress. However, probably realizing that no one actually feels bad about lampooning politicians, he veered the topic towards webpages that hurt religious sentiments. To tackle this so-called problem, he put forward the idea of setting up a proactive monitoring system to delete objectionable material before getting published. This proposal will certainly involve employing thousands of people to monitor the internet, like the Chinese. Digvijay Singh immediately backed his buddy - not at all surprising since he has already sued 22 people and eight websites for writing against him. What a sissy!

What these cry babies don't understand is that unlike TV, the internet lets you interact with content instantly. If you find something offensive, you are free to speak your mind right there. What's more, social networking sites already have a mechanism to report offensive content, which works just fine. People use cuss words for politicians everywhere, be it in the streets or salons. Does the government intend to monitor that next?

Earlier this year, Anna Hazare's initiative against corruption had gathered phenomenal support from tech-savvy youth. This move by the government seems suspiciously like an excuse to monitor such movements and nip them in the bud. Asking people to stop maligning politicians is as bad as telling them to not get involved in politics. Seriously, do they expect us to Like their profiles?

If you're outraged by the thought of censoring the internet in the world's biggest democracy, join the unique protest initiated by Kafila.org. All you need to do is write "Kapil Sibal is an idiot" as your status message on Facebook, and use the hashtag #IdiotKapilSibal on Twitter.

This could possibly be one of those images that Sibal found offensive.