The Korean giant's third phablet comes with the goodness of Jelly Bean. 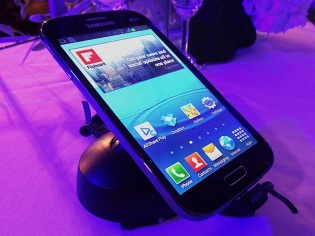 In a press event in Mumbai, Samsung announced yet another phablet — the GALAXY Grand in India. This 5" phone is priced at Rs 21,000, and is expected to hit stores from the first week of February. By the looks of it, the company clearly wants to attract more users with a relatively affordable handset in the phablet space. At the venue, we took the latest handset for quick spin. So here's our first impression of the GALAXY grand.


Design And Build
Samsung is known for coming up with similar looking phones, which ironically makes my job of describing the design that much easier. The Grand comes across as an overgrown GALAXY S Duos. Size-wise it's is as big as the original Note, and sports rounded corners just like the GALAXY S III. And like other 5-inchers, I find this gadget to be too big for a comfortable single-handed usage. The body is made out of glossy plastic, and the phone sports standard set of Android keys below the display, as seen on every other GALAXY handset. The volume rocker is on the right, while the Power / Lock button situated on the left, making it easy to use with your thumb.

Display And Specs
The phone's 5" capacitive screen has pixel dimensions of 480x800. While this screen resolution would have been fine for a 4" or 4.3" screen, it looks disappointing on such a large screen. Another let-down is the lack of Gorilla Glass protection. When compared side-by-side with Micromax's Canvas 2, there's hardly any difference between their screens. In fact, I prefer the Canvas 2's colour reproduction since there's a slight yellowish tint on Grand's display.
The phone is powered by a 1.2 dual-core processor, and has 1 GB of RAM. To take care of your photography needs, there's an 8 mp autofocus camera with LED flash. Other bells and whistles include 8 GB of internal storage, microSD card slot, Wi-Fi, Bluetooth 4.0, 3G connectivity, 2100 mAh battery. The detailed list of specs is at the end of this article.

Software
The Grand features Android 4.1 (Jelly Bean) with the TouchWiz UI on top of it. In short, the interface is similar to what we've on the GALAXY Note 2. The phone does a commendable job handling the latest Android OS. Swiping the home screens is mostly smooth, however, it does stutter a bit while multitasking. To sweeten the deal, Samsung has added nifty software tricks to the handset. This includes Pop-up video, Smart stay, Multi-window multitasking, Smart alert, and the company's very own voice-assistant called S-Voice. Samsung also claims to offer better implementation of dual-SIM functionality, which we'll thoroughly test in our review.

Closing Thoughts
Priced at Rs 21,000, this handset is Samsung's attempt to deliver a phablet at a relatively lower price tag. It is sure to face fierce competition from Micromax's A116 Canvas HD that packs in a quad-core processor and 720p screen. The domestic handset-maker will have to price this phone aggressively in order to sway customers away from Samsung's offering. That aside, from whatever time I got to spend with the GALAXY Grand, it comes across as a promising device, but we will leave hold on to the final verdict after an in-depth review.