TechTree Blog: Are Windows Phone 7.5 Handsets Still Worth A Buy?

A look at whether the newer platform is really worth the extra investment. 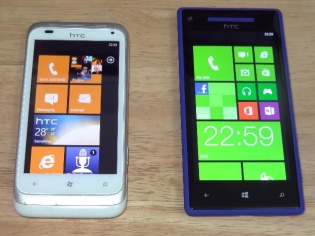 Windows Phone 8 smartphones are finally available from almost all major manufacturers such as Nokia and HTC, with Samsung also set to launch its own WP8 handsets soon. Since it is not possible to upgrade a Windows Phone 7.5 device to WP8, many would, no doubt, be wondering whether it is worth the investment. With the powerful hardware involved, it will no doubt be a noticeable dent in the wallet and hence not an easy decision to arrive at. Here is my personal take on whether it is time to discard the old for the new or is it still feasible to buy a WP7.5 handset. We will take a look at the main USPs of WP8, which are being portrayed as improvements over the predecessor.

Multi-core CPU: Current crops of Windows Phone 7.5 devices operate fast enough with their single-core CPUs, hence at present, more processing power is not required. However, things may change as new apps and heavy games appear to take advantage of the extra cores and higher clock speeds.

HD screens: Current generation devices with 800x480 pixel dimensions seem to be good enough for most purposes. WP8 handsets will feature screens with pixel dimensions of 1280x720 and 1280x768, which will surely appear better, but this is a trivial factor for an upgrade in my opinion, as it will be most noticeable, if at all, while playing HD content and newer games, which basically means that you will not spend much time glancing at the high-res screen. Don't forget, larger screen sizes also means less pocket-friendly phones.

Deep Skype integration: Apparently, this will blur the distinction between Skype and GSM calling. However, this is not a deal-maker as it is useful only for those whose buddies are always online on the VoIP service.

IE10: Since there is no hardware limitation that will cause any hindrance, WP7.5 devices might also get IE10, sooner than you might expect.

Nokia Maps: There is no doubt that Nokia's map and navigation software is one of the finest available, and there are no free alternatives that can match up to the capabilities and features. If you happen to have a non-Nokia WP7.5 device and are heavily dependent on GPS navigation, then this may hurt a bit. Having said that, would you pay a premium for an upgraded handset just for the sake of better navigation software?

Bluetooth file transfer: You can ask yourself - when was the last time you transferred files via Bluetooth. If you are trying hard to recollect, as I assume you are, this feature is not really a deal maker.

Removable storage and microSD support: Removable storage media may not be such a big thing in WP8, as it can be easily achieved in WP7.5 via a simple tool that doesn't modify anything on the smartphone. However, I must concede that the provision to add storage space with a microSD card is definitely a good thing these days when any amount of space is just not enough.

Wallet: Since this convenient payment method requires NFC, it is of little appeal in India until NFC-enabled terminals become common.

UI tweaks: Windows Phone 7.8 will bring most of the WP8 UI tweaks such as more number of tiles and resizable tiles to WP7.5 devices, so this is not really a factor in going for the new devices.

Taking all the factors into account, my opinion is that you don't really need to rush to get the latest WP8 handsets if you already own a comparatively new WP7.5 smartphone. WP7.5 handsets will be sold alongside WP8 handsets for quite some time so you will not be missing a lot if you still buy a WP7.5 smartphone. However, if you can't do without the latest, shiny gizmos featuring cutting edge tech, then go right ahead.

You are right, this is a deal breaker. But the article is discussing whether it is worth going for a WP8 phone, and that is still going to be more expensive than an Android device with a similar feature set.
Submitted by Jayesh Limaye on Tue, 22/01/2013 - 09:13
News Corner