Amidst futuristic technology, CES also throws up its share of Frankenstein monsters. 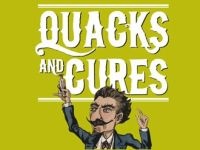 Forget homeopathy, numerology, or whatever other "healing techniques" that you deem unscientific. This one beats them all, hands down. A company that calls itself QuantumMAN presented itself in a booth at CES, under another company's name (Extraterrestrial Technology) to promote downloadable 'MEDICINE' (why they chose capital letters for 'medicine' beats me, but that's least of the absurdity here).

Quackery is not new, but what gets to me is the fact that this is presented at the world's largest consumer technology show. Technology, by definition, is the application of science to solve real world problems, and claims of downloadable medicines working on quantum principles is the exact opposite of science. How did CEA (the organization that holds CES) allow this? Is the organization so desperate for funds that anything goes, literally? Shame on you CEA! Shame, indeed.

The fact that QuantumMAN exists means they have found some gullible people to part with their money for a cure that doesn't exist. This begs the question, what audacious theory has the company come up with to explain how their MEDICINE works? Well, for one, they use the name of a complex branch of science. The word quantum has been abused by proponents of all sorts of nonsense to justify their theories which traditional science has disproved. Because quantum mechanics is still being researched, it has become convenient to take its name to justify any quackery. QuantumMAN too says their cures work via 'quantum teleportation' (??) and that the information for the body to cure a disease is sent by their computers to yours using a 'Portal Access Key' (they have even trademarked the term). Somehow, from your computer, this curing information is supposed to get transferred to your brain. They don't care to explain how, though. My guess is that they ran out of whatever 'substance' they were consuming in order to come up with this whole theory. Normal creativity just would not cut it.

[Scienceblogs.com has done a more detailed debunking of this quantum curing business]

How much does this cost? I'll save you the horror of visiting their gaudy website: One year's vaccine for common cold comes with a set of 12 downloads and costs $75. A 'heaven's gate' aphrodisiac costs only $5 though for a set of 5 downloads. A meth-blocker which promises to keep kids away from the narcotic is $125. And then there are more cures, listed on their website, including some for animals.

The death of scientific temper, bang in the midst of an event that celebrates some of the wonderful things that technology has brought to us — what irony!