Home » Software » Drill Through Your Monitor Into Little Worlds Beyond!

Drill Through Your Monitor Into Little Worlds Beyond! | TechTree.com

Drill Through Your Monitor Into Little Worlds Beyond! 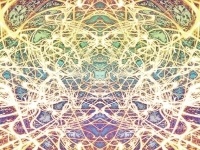 It's hard to introduce autostereograms to someone who hasn't viewed them: The explanation makes sense only after you've experienced one. Basically, autostereograms are 2D images that give your eyes 3D data. When you focus your eyes on an autostereogram, the image area on the monitor seems to become a box containing vividly three-dimensional objects — and the rest of the monitor merges with the room. When you lose focus, you see random dots or random patterns. So what are we talking about here — some form of optical illusion? Here's a brief walkthrough.

When you first look at an autostereogram, it looks like a repeated pattern that isn't special in any way. Or, it could even be just random dots. After you focus your eyes, a hidden world becomes visible. But technically speaking, autostereograms aren't optical illusions. With an optical illusion, you see simple 2D data; the illusory effect is because you "understand" the image in different ways. With autostereograms, your eyes get data similar to that in a "real" 3D scene. This page has a decent explanation of how they work.

So how do you focus and "get" the hidden image? Some people just can't seem to, and others get it in a matter of minutes. This writer's guide to focus goes as follows:
1. Look at the image without bothering about what it is.
2. Focus your eyes into infinity. That is, imagine there's an object many metres behind the monitor, and try to focus on it.
3. While doing this, remain aware of the image on the monitor. If the image on the monitor seems to change, just be aware of the change — but don't focus on it.
4. The 3D object will reveal itself at some point — maybe immediately, maybe after a few tries. The first time, your eyes will pop out of your skull. It can seem as though a window has suddenly been carved out of the monitor.

(There’s a different way of doing it, which is exactly the opposite: Un-focus. Relax, and let your eyes not focus on anything in particular. This is easier when you're feeling sleepy.)

Here's a large collection of autostereograms to start off with. As you explore, you'll find that there are variations in image type, different ways to focus, and so on. But just one will be enough to get you hooked! From Keith's autostereogram page. Stare for a while, and let your eyes worm their way through!

If you'd like to create your own autostereograms, here's a page that lists some tools. Of those, I’ll recommend Bigle 3D for simplicity. You'll need two things — (a) a pattern image that you can download and use, and (b) the depth image, which is what will appear as 3D in your autostereogram. The depth image should have the areas close to the viewer (or camera) as lighter, and far-away areas as darker. You can manipulate some regular photos with Photoshop — or even with simpler software — to achieve this.

Mr Shannon says on his page (above), "The most amazing aspect ... is that such images have never existed in the course of human evolution — they could only be created after computer graphics got to a pretty high level of development. And yet the human visual system is powerful enough to deal with such unprecedented stimuli". I don’t quite agree: The stimulus isn’t unprecedented — it's close to that of a regular 3D image. It's all about how you focus (or let go of focus). Which is similar to much of life, I might add.

That's cool — the method is easy to explain and it works! (I've tried something similar: Letting my eyes alternate between crossed and straight.) And hey, when you saw these in The Hindu, were they published as something from the Internet — or in some other context?
Submitted by RMR on Fri, 23/11/2012 - 15:59

Yes — I can see that it happens with coffee bean and a couple of other textures. The wallpaper seems to go "inside," and the icons float above the texture! But there's no particular 3D image, only the background. My guess is that (when you create an autostereogram), the pattern image creates the depth, and the depth map image creates the 3D object.
Submitted by RMR on Sun, 25/11/2012 - 09:23

The old Cat. An old woman had a cat. The cat was very old; she could not run quickly, <a href="http://www.runescapeweb.com">rs gold</a> and she could not bite, because she was so old. One day the old cat saw a mouse; she jumped and caught the mouse. But she could not bite it; so the mouse got out of her mouth and ran away <a href="http://www.runescapeweb.com">rs gold</a>, because the cat could not bite it. Then the old woman became very angry because the cat had not killed the mouse. She began to hit the cat. The cat said, "Do not hit your old servant. I have worked for you for many years <a href="http://www.buyrunegp.com">Runescape2 Gold</a>, and I would work for you still, but I am too old. Do not be unkind to the old, but remember what good work the old did when they were young."
Submitted by yuanfang on Mon, 25/03/2013 - 12:34

Three pastors in the south were having lunch in a diner. One said, you know, [url=http://www.yewlog.com/]Runescape Gold[/url], since summer started I’ve been having trouble with bats in my loft and attic at church [url=http://www.sellgp.com]rs gold[/url]. I’ve tried everything----noise, spray, cats----nothing seems to scare them away. Another said, Yes, me too. I’ve got hundreds living in my belfry and in the attic. I’ve been had the place fumigated, [url=http://www.rs2s.com]rs gold[/url] and they still won’t go away. The third said, I baptized all mine, and made them members of the church...haven’t seen one back since!
Submitted by yuanfang on Mon, 25/03/2013 - 12:35
News Corner