7 Reasons Why Tablets Could Replace Netbooks

This could happen sooner than you thought. 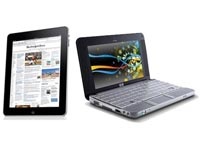 2011 has been dubbed "The Year of the Tablet", and rightly so because so many of these ultra-compact computing devices have been launched this year. A tablet PC was considered unviable as a computing device a few years ago, but tablets today pack in a lot of firepower to be able to handle almost any normal computing task. Here is a list of the reasons why tablets can potentially replace netbooks in the near future.

1) Ultra-portability
While netbooks have been termed ultra-portable, tablets are even more so, thanks to their structure as a single slate, rather than a hinged design like a netbook. Tablets are usually much lighter than netbooks, and their size lets you take them anywhere. Even their chargers are more portable, making it easier to carry the whole thing anywhere.

2) Price
Tablets have come a long way from being too expensive to dirt-cheap, with high end exceptions such as the iPad 2 and the Galaxy Tab. Low end tablets start at around Rs 7000, and pack in a decent performance for daily computing tasks. Netbooks, on the other hand, rarely breach the Rs 12,000 mark, and most are priced above Rs 15,000.

3) Versatility
Most tablets come with Google Android operating system, which gives them access to a huge repository of apps from the Android Market, many of them being free. These apps allow the tablet to do just about anything, thanks to the creativity of the app developers. The above also applies for other tablet OSes such as iOS and BlackBerry OS. This versatility is not so easy to achieve for a netbook.

4) Battery Life
The battery life of a tablet is simply incomparable to that of the netbook. A tablet can easily last for more than half a day on a single charge, while a netbook struggles to make it past four or five hours of normal usage. The better battery life lets you take it anywhere without having to worry much about losing charge in the middle of your work.

6) User Interface
Being touch-screen devices, the user interface of tablets is usually refined, intuitive, and user friendly. Not only is the operating system designed to allow for efficient interaction with the user, but also the applications sport a user friendly interface. For those who miss a QWERTY keyboard of the netbook, there are inexpensive keyboards available, which can work with any tablet.

7) Virus-free
Ever heard of viruses attacking tablets? Tablets have so far remain insulated from such attacks. Although it cannot be said that it will remain so forever, it is considerably safe as of now to work on a tablet than on a netbook with Windows, which has always been a prime target of viruses.

That is not all. While this may not really be related to computing, the GPS unit built in many tablets helps use it as an inexpensive navigational tool when it is not being used as a tablet. Netbooks may have been in vogue a couple of years ago, but tablets seem to be set to rule the future.