While expensive smartphones come with their unique features and specifications, budget phones are still a favourite among smartphone users. Moreover, with numerous mobile data packages coming into play, Indians can now afford both a smartphone and fast internet.

Catering to the majority, most budget smartphones come with features found in their expensive counterparts, such as high-resolution screens and cameras, fingerprint sensors, 4G and even 5G connectivity, and many more.

Therefore, to make lives more accessible, we have compiled a list of the best smartphones under Rs. 10,000, including brands such as Lenovo, Asus, RealMe, Nokia, and so on. The prices range from Rs. 7,000 to Rs. 10,000. These affordable phones come with attractive features that you will get your money’s worth from them. While this smartphone is not the best, it has a few good things going for it, giving it an edge over other smartphones. The overall finish is plastic, and although it is not very appealing to the eye, it is practical and does not leave behind smudges. The display, with its colours and brightness, is average. While its hardware is quite basic, it does offer a Unisoc T610 SoC, which is quite a rare entity among smartphones globally. Moreover, the processor is not just suitable for everyday use but works well with gaming too. The software is smooth, and there are no third-party app nuisances. The 5,000mAh battery is quite long-lasting, even with use for gaming. Some drawbacks would be the slow charging and the just average performance of the camera. RealMe is well-known for its display and camera quality. The Narzo 30A comes with a patterned design. The fingerprint scanner is well-positioned and convenient. The screen is decently sized at 6.5 inches and has a 20:9 aspect ratio. There are 2 Nano-SIM slots and one SD card slot. However, with its 6,000mAh battery, the smartphone is quite heavy. An excellent addition to the pack is the 18W charger. The smartphone is available in 2 colours and 2 RAM options. It has a powerful MediaTek Helio G85 SoC and two storage options of 32GB and 64GB.

One feature of this budget phone that does not disappoint is the face recognition that does not need more than one attempt on an average to unlock. In addition, the 13-megapixel primary camera and 8-megapixel front camera are significant attractions among most users. While the rear camera has an average performance, the front camera wins the show.

The smartphone was launched on February 24, 2021 on its official site, and is available for purchase in-store, on Amazon and Flipkart. The Motorola E series is quite affordable in its offerings. The Moto E7 Plus has basic and clean hardware and software. It has a 6.5-inch display with a 20:9 ratio. The smartphone runs on Qualcomm Snapdragon 460 SoC, with an octa-core processor and 4GB RAM.

The camera is quite a steal, with a 48-megapixel primary camera and a 2-megapixel depth sensor. It comes with a dedicated light mode for low-light photography, a 5,000mAh battery, and a micro USB port. One downside to this budget buy is that it comes with only a 10W charger and no fast charging. It has Android 10 and its custom My UX UI on top. However, the UI only has the essential and valuable features loaded.

This budget buy was launched on September 11, 2020 on the official Motorola website, and is currently available on the same, as well as on Amazon. The RealMe Narzo 10A appears like a cosmetically upgraded RealMe C3, which compliments the smartphone as the latter is a popular choice among the majority. The Narzo 10A includes a fingerprint sensor and a primary macro camera, which is quite fun but impractical. With its MediaTek Helio G70 processor and excellent battery life, the phone provides a decent gaming experience. However, the camera quality is average, and only configuration is available.

This smartphone was launched on May 11, 2020 on its official website and Flipkart. Buyers can purchase this model both on Flipkart and Amazon, as well as its official offline stores. 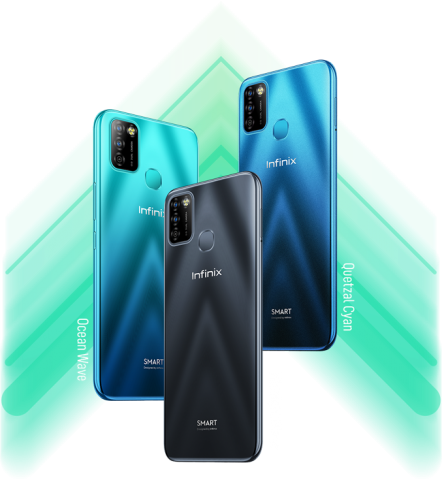 The least expensive in this list, the Smart 5A smartphone has an excellent display of 6.52 inches and a dewdrop notch. The dual flash setup and two LED flashes make it stand out among its competitors. It comes with a MediaTek Helio A20 SoC but has a plastic body and only 2GB RAM and 32GB storage.

The phone runs on XOS 7.6 Android 11, which gives acceptable performance for its price range. Although the camera flash setup is unique, the camera itself is fundamental, with an 8-megapixel primary camera. Unfortunately, the performance is very average and not the first choice for those who prioritise this feature. Most budget smartphones are average at most, with no iconic feature except their price range. RealMe C25 fits perfectly into this category. It has a sturdy, practical plastic body with a good grip. While it gains an edge with its MediaTek Helio G70 processor, it ends up losing it with the lack of an ultra-wide-angle camera. While the battery life is above average, the camera performance is just basic. Overall, this phone is ideal for those on a heavily tight budget and in need of long-lasting battery life.

Launched on March 23, 2021, the smartphone is available for purchase on both Amazon and Flipkart, with many interesting offers. The Micromax In Note 1 is quite different from its competitors, and what makes it stand out is its 6.67-inch display, MediaTek Helio G85 processor, 4GB RAM, and 64GB storage. While its 5000mAh battery performance is average, the camera wins the show. The rear camera of 48MP + 5MP + 2MP + 2MP and the front camera of 16MP is worth your money.

The official Micromax site and Flipkart together launched this phone on November 3, 2020. Currently, interested buyers can check out the model on Flipkart. This smartphone offers very few standout features. It has a 6.52-inch display, a MediaTek Helio G35 processor, 2GB RAM, and 32GB storage. However, the 5,000mAh battery is average, and the dual camera of 13-megapixels and 8-megapixels is just passable.

Launched on November 3, 2020, this phone is available in stores and on Flipkart. Another average phone in the list of budget smartphones, the Poco C3, has all the essential features one would expect, including a 6.53-inch display, a MediaTek Helio G35 processor, a 3GB RAM, and 32GB storage, a 5000mAh battery, and a 13-megapixels camera. But, perhaps, the only attractive feature is its low pricing.

Launched on October 6, 2020, the Poco C3 is available on both Amazon and Flipkart for budget buyers. 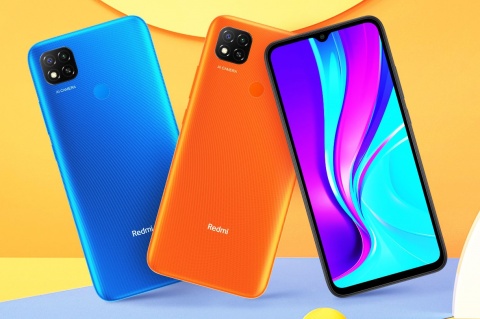 While the phone is just average in its features and fits perfectly into the mold of budget smartphones, its only two attractive features are its 4GB RAM and 64GB storage and the 5MP front camera.

This smartphone was launched on August 27, 2020. Buyers can check it out on both Amazon and Flipkart for the best prices and discounts. 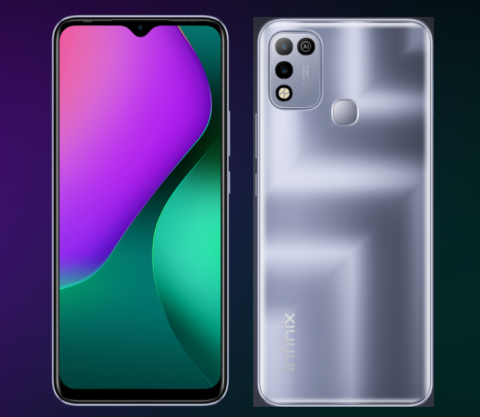 Considering its offerings, the Infinix Smart 5 is a budget buy. The 6.82-inch HD+ display, dewdrop notch, and selfie flash are typical of most Infinix smartphones. Although the phone is heavier with its 6000mAh battery, its rear-mounted fingerprint scanner is an attractive feature.

Heavy users may be dissatisfied with the MediaTek Helio G25 octa-core processor, 2GB RAM, and 32GB storage. Still, casual users may be pleasantly surprised, for the phone runs on Android 10 with a custom XOS 7 UI. However, the camera is, once again, just passable, and the low light performance is much below average. Overall, this phone is an ideal choice for those running on a strict budget.

Launched on February 11, 2021, this smartphone was promoted and is currently available on both Amazon and Flipkart. 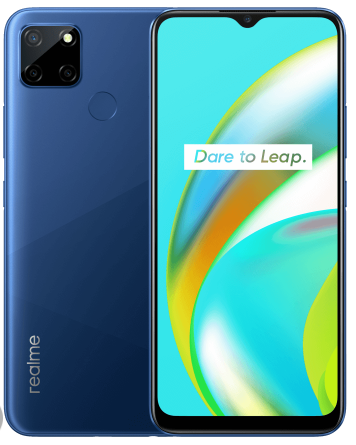 The RealMe C12 has a long list of pros and cons. While the phone is quite heavy, it has a trapezium gradient design on its back, perfect for warding off fingerprint smudges. It has a fire-resistant and splash-resistant back cover with a 6.5 inch HD+ LCD screen, which is quite a catch for budget smartphones. However, the colours are only decent, and the quality of the panel is just average. It has used the MediaTek Helio G35 SoC, which is not the best processor for its price. It also has only one available configuration of 3GB RAM and 32GB storage. While the gaming experience only allows for basic, simple games, the 6000mAh battery is quite excellent. The phone, however, does not support 18W fast charging.

The C12 comes with a primary 13MP camera, a 2MP monochrome camera, and a 2MP macro camera. Unfortunately, the selfie camera is a 5MP one with average quality and poor low light performance.

While the phone was launched more than a year back on August 14, 2020, it is still a popular choice among Flipkart and Amazon users. This phone is quite similar to the C12 in its appearance. The only few features that set it apart from RealMe C12 are its availability in two configurations, namely, 3GB RAM and 32GB storage, and 4GB RAM and 64GB storage. In addition, it has an excellent battery life, with its 6000mAh battery, and supports 18W fast charging. Another selling point for this smartphone is the addition of an 8MP ultra-wide-angle camera. However, the image quality continues to remain average.

With its launch on October 28, 2020, this phone has been a popular choice among users, particularly the regular Flipkart users, even to date. This phone is truly a budget smartphone, with its relatively weak MediaTek Helio G35 processor and just 2GB RAM and 32GB storage. It works well for casual users but is not ideal for heavy gaming. The only thing working out for this model is its excellent battery life, a feature RealMe is well-known for.

Released on May 5, 2021, this phone is perfect for strict budget buyers. To avail of even more attractive offers, buyers can check out Amazon. With a 9.2 mm thickness and a weight of nearly 200 grams, this phone is quite chunky. Although it has a plastic base, the matte finish gives it a sleek look and protects against fingerprint smudges. Unfortunately, it sticks to the old-school headphone jack as well.
The display is a large 6.5 inch IPS TFT LCD panel with HD+ resolution. The fingerprint sensor works well and unlocks the phone with minimum attempts.
Although the Android 9 layout is refreshing and straightforward to use, it does feel lacking at times. The smartphone uses the MediaTek Helio P35 SoC and has only one configuration - 4GB RAM and 64GB storage. However, it has a good battery life with a 5000mAh battery.
It comes with three rear cameras, a feature commonly seen in phones under Rs. 10,000. While the cameras work well in daylight, their low-light photo quality is relatively poor.
Launched on April 20, 2020, the smartphone is quite an older model. Buyers can check out Flipkart for better offers on this basic budget buy.
Price - Rs. 9,999/-