The microblogging service brings stars closer to their fans, but at a cost. 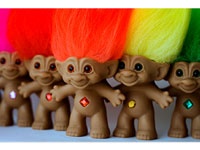 It is no secret that Twitter owes a huge bit of its success to several celebrities, who share their minds on the microblogging service. It has also created a few celebrities (or monsters) of its own. However, at times, some of these high-profile twitterati experience a bout of verbal-diarrhoea, and often end up becoming sitting ducks for internet trolls. There are also times when some celebs double up as trolls themselves. Let us take you through some interesting celeb-troll encounters and how these Twitter tales ended.

Two-time Olympic swimming gold medallist, Rebecca Adlington from UK is quite active on the microblog. She recently let the cat out of the bag, when she said that she was insecure about her physical appearance. That resulted in a nasty spat between her and a troll (@rapier999). Lucky for her, she has loyal fans that sprung into her defence, at once. However, considering how the London Games are just around the corner, Adlington has decided to stay away from the service altogether till the tournament is over, just so that she can concentrate on the game better. Wise move, especially because the 2012 Olympics will shut out all social networking websites anyway.

No one anticipate that an exchange of tweets would end up being settled in a court of law. Now, this is what you can call high-profile trolling. Ex-commissioner of IPL Lalit Modi seemingly wasn't too happy being out of the limelight for long as he accused former New Zealand cricketer Chris Cairns of fixing matches. What ensued was a full blown libel case, the first of its kind involving a social networking website. At the end of this episode, the 24-word inflammatory tweet has cost Modi around £1.4 million (Rs 118,531,700), as he readies an appeal to overturn the verdict. German model Claudia Boerner wasn't so lucky, as her detractors outweighed her loyalists. The pretty model couldn't deal with all the negative criticism coming her way from the web, not just Twitter, and paid for it with her life. Drawing flak for her appearance in what turned out to be her last appearance on TV, the distraught lady committed suicide. All this just makes you realise that popular or not, you need to get your self esteem up, if you want to bare your soul on the internet.

Let me wrap up with celebs who double up as trolls. Yes, how can a Twitter-troll post be complete with those who take digs at their own people, unabashedly? My pick of the lot, Kamaal R Khan (aka KRK). The exaggerating "star" doesn't spare any of his "colleagues" as he makes scathing remarks on their poorly made movies and even politicians; basically everyone who is popular. While the fraternity seldom reacts to his antics, it sure is fun to read what he usually puts up.

All said and done, celebs who usually end up having conversations with their followers on the microblog do tend to get into quite a few war-of-words every now and then, which mostly end on a sour note. Remember Chetan Bhagat and the #ChetanBlocks incident? Well, to blame someone here, is like trying to figure out if the egg came first or the chicken. However, with a bit of prudence in your tweets and online reactions can save you from  a lot of heartburn, don't you think?