We list out best streaming services in India based on streaming quality, catalogue, and user interface. 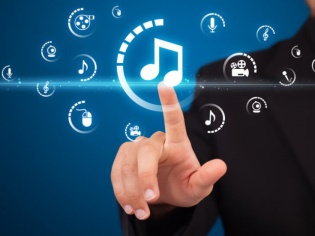 Remember back in the day, you had purchase those charming but exorbitantly priced cassettes and CDs? That was the time, when we would have to buy the entire album just to enjoy a single track. However, ever since the smartphones have taken over, media has mostly gone digital. Today's youth now prefers to stream music. There are a host of music streaming services in every app repository. However, for an Indian music aficionado, choosing a right app is still tricky. To make things easier for you, we have listed out top music streaming apps in India based on its search, filtering options, streaming quality, catalogue, and user interface.
Saavn
Founded back in 2007, Saavn has been one of the first apps to bring this initiative to our country. Saavn provides unlimited free access to music content across all genres and all major regional languages. Saavn’s catalogue includes 30 million tracks and be assured to find the latest tunes and some exclusive for Saavn content here. The app even provides in-house curated playlists categorised by genre, artist, or your mood. There's also a wide selection of podcasts, radio channels based on drama, mystery, comedy, and sports.
The app UI is quite straightforward and searching for tracks and adding to favorites or playlists is just a tap away. You can play tracks at 64 Kbps quality to 128 Kbps for free depending on your internet connectivity. For the highest quality of 320 kbps you would need to subscribe for the paid service which also enables you to download the tracks to your device and saves you from the annoying audio ads as well. Saavn can also be used as a standalone player for your device as it reads the music data on your device with ease. Just hit the ‘On my phone’ option under Saavn menu and you can access tracks and playlists from your device for offline play. On minimizing the app, the Saavn’s notification panel widget lets you play, pause and forward with ease. The only gripe though would be the fact that if you mistakenly kill the main app then you lose this widget from the notification menu as well as the phone’s standby screen.
Saavn is available on Android, iOS and Web interface. The monthly subscription for Android being Rs 99 and for iOS Rs 120.
Gaana
Gaana’s UI look and feel carries a laid back approach with red and white accent theme running through the entire app. It features well curated curated playlists from experts and other users. Gaana hosts a huge collection of Bollywood, International, regional content such as Marathi, Bengali, Rajasthani, Bhojpuri, Malayalam etc. It has a 10 million songs database. You can save your favourite tunes, playlists, albums and artists without breaking a sweat. Gaana ‘Gapless playback’ as an exclusive feature and adds to the overall music experience. You can listen to non-stop radio and its association with radio giant Radio Mirchi 98.3 FM enables you access 10-Radio Mirchi stations. There's even ‘Times Now’ news channel available to keep you updated with latest news.
Gaana takes over your local device content to play your songs, playlists stored on your device and can be used as a standalone app. Gaana provides free online streaming of music, radio and videos. However, if you wish to experience higher quality streaming you can opt for monthly Gaana+ subscriptions which start from Rs 99 for Android and Rs 120 for Apple iPhone and iPad. The subscription allows you to download unlimited content for up to five users.
Wynk
Developed by Airtel, but is available for all users. Wynk currently hosts up to 2.6 million songs across Indian and International music. It ensures high quality music streaming for free on demand. Wynk covers all genres including Bollywood, Pop, Rock, Metal, Bhangra, Devotional, Romantic, party songs etc. It also delves into regional songs from Marathi, Bhojpuri, Rajasthani, Bengali etc. languages. Of course, it also features many curated playlists by moods, artists, genres etc. and an internet radio for hours of uninterrupted music playback.
The app is very well laid out and we found it to be very consistent and is on par with others in functionality. It quickly reads the device storage for offline music and integrates smartly in the Wynk music player. As you can see the songs on the device are denoted as ‘MP3’ in our case and you wouldn’t require to download those tracks. Quite a nifty feature to have and very convenient if you wish to make Wynk a standalone player for your device. Wynk provides a first month free trail for all new users with ad-free music streaming and download. Later you can opt for monthly subscription of Rs 99 for non-Airtel Android users, while Airtel users get the same for as low as Rs 29. Airtel users get Free Wynk subscriptions on certain Data recharges. Wynk is available on Android OS and iOS.
Hungama
Hungama is another such music app favourable for Indian users with over 3.5 million songs and also videos of Bollywood, Regional and International flavors. It’s adaptive streaming feature guarantees a seamless music experience and works without buffering on slow network speeds. You can listen to celebrity curated playlists and radio channels. You can watch music videos and also view lyrics to setup a mini karaoke experience. 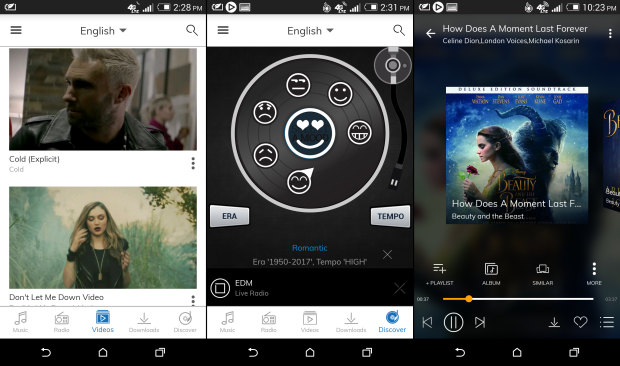 The app layout is minimalistic and lets you browse through content without any stutters. It has a shiny looking music player but is clean and offers very good readability throughout the app. It has a very nifty feature onboard called as ‘Discovery’ wherein you can set your mood and tempo of the song to discover random music content as per your requirement. Also worth mentioning is the fact that killing the main app doesn’t hinder your music experience as the notification/standby screen widget runs independently. The feature we had been missing on the other apps, although doesn’t seem to be a deal breaker, but would be beneficial to turn the app into a standalone player.
Music, video and radio streaming is free but with ads. Subscriptions start at Rs 99, which liberate you from the ads and enables you to download music and videos offline. Hungama features a reward system by which you can earn coins as you enjoy by inviting friends, sharing and creating playlists on the app. These points can be redeemed later for subscriptions, movie tickets, discount vouchers, merchandise and more. Hungama is currently available on Android OS, iOS, and Web platforms.
Soundcloud
Soundcloud is the big daddy of all audio streaming apps as it compiles a huge library of over 150 million tracks and growing as we speak. Soundcloud is similar to twitter interface and approach which lets you follow artists and albums to keep a track of latest uploads and whereabouts. You can like, share and comment on posts. Get suggestions based on your likes and listening habits. Create custom playlists for parties, workouts or based on your mood and share with your friends directly from the app.
The app is very clean and lag free. The music player impresses with awesome sound quality and adaptive background theme based on your current track. Browsing tracks across all genres and languages is done swiftly and accurately and ensures an ultimate music experience. Queuing tracks and creating playlist is flawless and the app runs in the background quite efficiently.
Soundcloud is available for Android OS, iOS and desktop platforms. New users get free first month trial subscription and is chargeable at $4.99/month later for ad-free playback and offline caching. Also if you are a creator of music, podcasts or any type of audio, then Soundcloud provides you a good platform to share your work and get instant recognition and keep your community humming.