Bored of your existing homescreen? It's time to give it a makeover with these launchers. 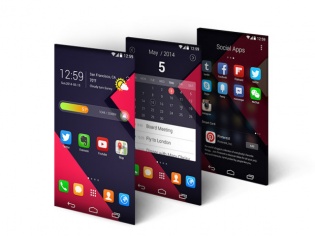 With so many brands trying to outdo each other, smartphones go dated in a few months. For most of us Indians, it is not feasible to upgrade their phone every few months. However, you can give a fresh breath of life to your smartphone with a few tweaks. The android play store has a sleeve of launchers which can provide an entirely new look and feel to your existing system launcher. Let’s look at some of the best free Android OS launchers out there, which could enhance the overall experience with some nifty add-on features baked in.

Google Now
The much-preferred stock Android experience is found on Nexus and Moto line-ups. However, you can experience it on your phone too. Akin to the stock nature of the OS, the Google Now launcher essentially transforms your non-nexus device for a similar experience. It also gets the Voice activated “Okay. Google” command feature and the translucent theme elements of the stock Android. It’s a very resource friendly and lightweight launcher. However, it misses on heavy customising features and strictly serves the purpose as a resource friendly launcher. Arrow Launcher
Microsoft has mostly given up on its Lumia series of phones. However, it is quite active when it comes to Android Platform. Especially, its ‘Arrow launcher’ is one of the most elegant launchers available on Google’s mobile platform. The launcher’s stability stands testament to Microsoft’s expertise in software. Once installed, it lets you select your most frequently used apps and alongside some preset multiple home screens which display your recent phone calls, reminders, and documents. Also, you get daily Bing wallpaper updates and other customizable features. 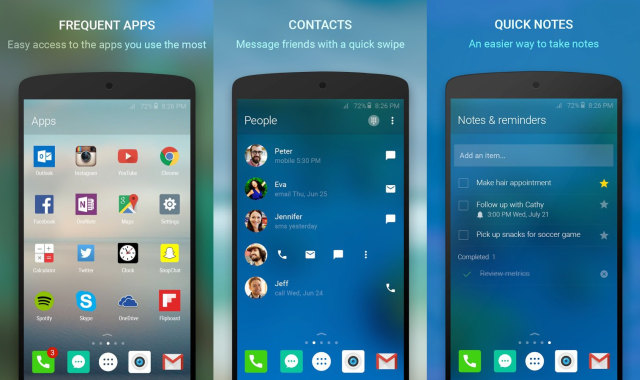 Evie Launcher
Advertised as “By the Android users, to the Android users”, Evie launcher is one the most acclaimed launchers in the Play Store. It’s minimalistic in its approach. The UI feels like a fine blend of stock android and Apple’s iOS. It has a customizable app dock on the front. Offers unread badges to the most popular apps. Gets some nifty features like ‘Quick navigation’ to instantly launch a certain app from the search menu. And gets personalization features to tweak layout, app icons, icon size and wallpapers. It gets support for Live wallpapers as well. 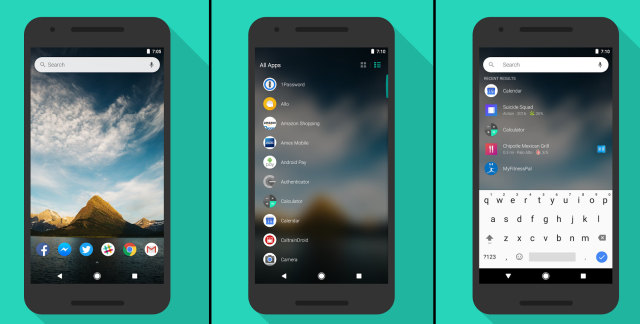 Action Launcher 3
Awarded as the Google Play’s best app for the year 2015, the Action Launcher 3 is still going strong. It is closely developed on the lines of the Pixel launcher and share certain similarities. It features the Pixel like swipe up from the dock to reveal the apps feature which makes it interesting. It has very good theme customizing options including app icons and size changeability. The inbuilt Google search bar options lets you search over the internet and search for installed apps on the device. Moreover, it packs in support for hiding folders enabling privacy control. Apus Launcher
Currently the top ranked launcher in the android store, the Apus Launcher claims its position owing to its wide range of features. It brings themes, wallpaper, inbuilt RAM boost and battery saver in a single package. It has in store more than 30,000 themes, icon packs, and wallpapers to choose from. The ‘Smart Folder’ feature in this launcher enables you to organize your apps based on their usage. The Apus search bar enables you to search for the installed apps and data over the internet. It has a nifty feature called ‘Apus Know’, which is like HTC’s sense UI and provides highlights from the apps, news, traffic, weather etc. on the go.