Home » Features » When Is Your Actual Birthday Google?

When Is Your Actual Birthday Google? | TechTree.com

When Is Your Actual Birthday Google?

You turned adult today without giving us any clarity on your date of birth! Google has an awesome birthday doodle up on its search engine homepage, denoting its 18th birthday. Yes. Google turned adult today, i.e., on Sept 27, and when is the last date you remember Google celebrating its birthday?

Didn't the search engine giant celebrate its birthday on Sept 26, back in 2005. Or did we forget that Google even celebrated it's birthday and put up such merry doodles on Sept 7 in 2004, and Sept 8 in 2003?

Amidst all these confusions, Google is still celebrating the joy of entering the adulthood, without any clue of when it was actually formed! In-fact, as far as I remember, Google had also admitted that there are four birthdays associated with the company, back in 2013.

But, Google seems to have stuck to the birthday as on Sept 27, mainly because this was the date back in 2002 when the first birthday Doodle was used! Now, that's a solid logic, isn't it?

The company was formed on Sept 4 1998, according to Wikipedia, and we have never seen Google celebrating its birthday on that date! Pretty Weird! And, taking this confusion to a whole new level, I decided to ask Google Assistant about it's birthday, and guess what, I got a reply saying, "I don't have a single birthday!" Here's the screenshot: 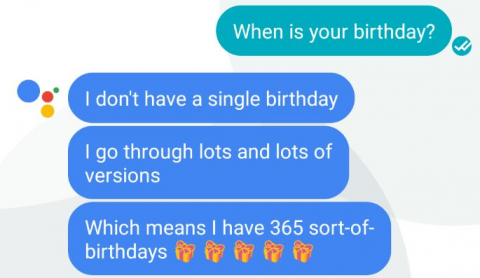 With this weird thought in mind, I would like to ask Google only one question - "when is your actual birthday?"