Huawei P9 Up Against LG G5 And Galaxy S7 Edge

Huawei P9's most talked about feature is the dual rear camera setup that is powered by Leica. 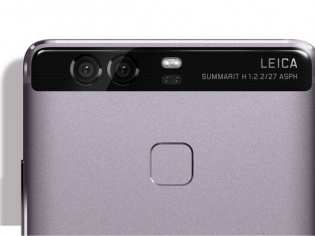 Diving straight into the topic -- Apple's got some hot competition, reports KnowYourMobile.com. Well, if you are wondering what's the competition, then, it's Huawei P9, the recently launched smartphone with a dual camera setup, powered by Leica.

With Huawei P9's specifications looking great on paper, it is not only a hot competition to Apple, but also a tough one to the recently launched LG G5 and Samsung S7 Edge.

Huawei P9 sports a 1.8 GHz octa core HiSilicon Kirin 955 processor while LG G5 comes with a Qualcomm Snapdragon 820 and Samsung S7 Edge features a Exynos 8890 octa core processor. However, considering the display screen size, Huawei P9 comes with 5.2 inch, while LG G5 and Samsung S7 Edge come with 5.3 inch and 5.5 inch respectively. Here we cannot actually tell which would be better, as it is purely a subjective preference. While some prefer screen size of 5 inch (as it is easy to carry around), there are others who prefer larger screens (for better multimedia consumption).

On the RAM part, P9 seems to be having a GB less than the other two smartphones, which might affect how the smartphone can handle multiple apps at the same time. Also, on the internal storage end, all three smartphones come with 32 GB internal. However, Samsung S7 Edge also comes with a 64 GB variant, so that's something interesting for people who want more space to install applications.

All three smartphones are flagship device that we have witnessed this year, and feature some of the best cameras we have seen. Huawei P9 and Samsung S7 Edge come with a 12 MP primary camera, while LG G5 features a 16 MP camera sensor. However, Huawei P9's dual camera technology, and partnership with Leica, is something pretty impressive. However, Galaxy S7 Edge is being reported by many tech gurus as having producing a better and wider image, all thanks to the f1.7 aperture that comes with it. But, Huawei P9's front camera definitely gives more details due to the 8 MP shooter, which allows users to crop in deeper. Speaking about the battery life of the three devices, we can clearly see that Samsung Galaxy S7 Edge is the winner as it comes with a 3,600 mAh battery. Huawei P9 comes at second place with a 3,000 mAh battery while LG trails at the last with a mere 2,800 mAh battery. However, we already know that LG G5 features a removable battery and a couple of accessories that allow users to actually keep another battery fully charged up.

Having said everything, we can clearly see that Huawei P9 is not the clear winner when compared with the other two smartphones. But, if you consider the price tag and its value, probably you can make your mind to opt in Huawei P9 rather than going for the other two.