The ‘blue skin’ perceived as offensive to Hindus as it disrespects Goddess Kali. Blizzard, which is notoriously famous for its  over sexualised characters, this times has run into trouble with the ‘Devi Skin’ for Symmetra. Apparently it is offensive and belittles the Hindu deity Kali. This time around, a self proclaimed Hindu “Leader” Rajan Zed, who calls himself as the President of Universal Society Of Hinduism has voiced his displeasure at the “trivialised” depiction of “the highly revered goddess”. This isn't the first time a video game has allegedly upset religious sentiments. In the year 2012 Hi-Rez Studios, the creators of Smite received flak for its portrayal of Kali.

If you watch the Overwatch video of the Devi Skin, there is nothing remotely obscene about it. If Symmetra is inspired by an Indian woman, then it miserably fails to flatter the voluptuous Indian woman! It rather reminds you of anorexic models with the “thigh gap”!

Why are we being offended? Are we hypocritical about the notion of freedom of expression and creative liberty? Is our pseudo cultural pride being hurt? Are staunch believers fuming with anger and disgust?

Remember the Amrish Puri and Kali worship scene from Indiana Jones and Temple of Doom, oh, remember the sultry supermodel Heidi Klum’s Kali Halloween Costume? Now don’t even begin to think of how disoriented is the West portrayal of the mighty Goddess Kali. We are ignorant and hypocritical, damn it, admit it!! We have scores of Indian films that depict Mother Kali as a ferocious bloodthirsty monstrous being, often associated with black magic. Why are we not offended then?  Where did the religious leaders vanish to?

And so the next thought that plagues my mind is that, all the hulla bulla  is now centred around the depiction of a Goddess, How would the world, the press, gamers, leaders, thinkers and bloody every Tom Dick and Harry react to Symmetra being just a regular sexy woman with an enticing hourglass figure, alluring and suggestive moves with a shimmering cleavage and thunder thighs? Who gives a shit?  Don’t you dare call me a feminist! That’s not my point.

Alright, if the Devi skin which is now blue in colour is changed to that of a normal skin tone, it would naturally be perceived as a racist move! Devi’s skin a shade darker or fairer would tear this world apart! 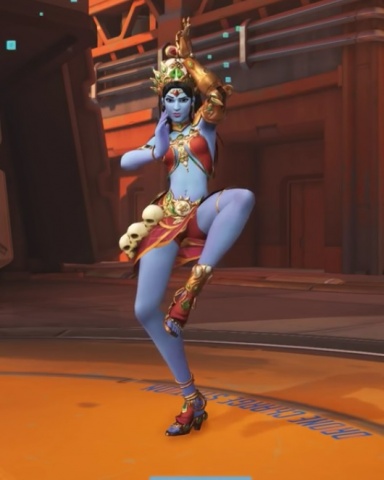 It’s just a game, a video game! Symmetra is just an inspired creation, with extremely vague Indian designs and postures. The so called Devi posture to me looks like a hybrid posture that combine Kung Pu and the Nataraja pose!

Just because it’s called Devi, don’t take offence, there are many “Devis” exploited and trivialised.