Home » Features » The Future Of Mobile Apps Is Dead?

The Future Of Mobile Apps Is Dead? | TechTree.com

Snapchat and Uber are being loved by many smartphone users! What's your take? Who doesn't know the funny moment when Flipkart announced their app-only strategy, only to come back on Google Chrome soon? Well, there's a lot behind many things than we can actually think of.

While Google Play Store and Apple App Store are getting new apps every now and then, the research from Nomura tells that this app trend might soon come to an end.

Most of us might have experienced one simple, yet complicated problem while using a smartphone - Insufficient storage! Well, this makes people think many times before downloading apps. This has also become a serious threat for most of the independent app developers and publishers, in getting users download the app.

In fact, Quartz has reported that most smartphone users in America download zero apps per month. This is definitely scary for app developers, and no doubt their growth is slowing down gradually.

Here's a graph published by SensorTower, Nomura Research, on its website, clearly showing nearly 20% year-on-year decline in the US apps downloads. 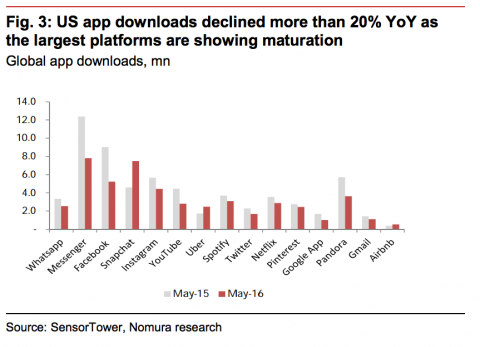 Here's another graph that shows the international market for the apps. Internationally, we can see some improvements in the market, when compared to the US market. However, we can clearly see Snapchat and Uber growing spectacularly both in US and internationally while all other apps including WhatsApp, Gmail, Twitter, and Instagram are falling down.

Does this mean SnapChat and Uber are the future of mobile apps? While we go blank in answering this, we do know one thing - to make it big in the mobile app industry now, you got to a brilliant company with some mind boggling technology attached to your product/service!