It's not Android Wear, but the S2 ranks among the top five smartwatches--now with more reason Samsung's Gear S2 stands apart in the world of smartwatches. It's based on Samsung's own Tizen operating system and though it gets along with other Android phones (and even the iPhone), it has never had the number of apps Android Wear watches have. Not that they are spilling over with apps either.

More than that, it's not a Google-centric watch like the Android Wear ones, obviously. Google things don't just happen automatically.

But the Gear S2 has its own strengths.

The S2 is a round watch, thank goodness. It's also nowhere near as clunky and large as some watches that only look acceptable on men's wrists. This one can actually happily be worn by either men or women. It's got a clean and compact look.

The great thing is, there's also a rose gold model that's just been launched. With a light-colored leather strap, this looks really pretty--and costs Rs 34,900. Altogether there are five models. There's also a white version that costs Rs 24,300. Their Classic edition is Rs 25,800.

The S2 has a 1.2-inch Super Amoled display with a screen resolution of 360x360 pixels and a pixel density of 302ppi. It runs on a dual-core 1GHz processor and 512MB of RAM and 4GB of storage.

The S2 models are water and dust resistant--but if the strap is leather, that obviously won't be happy with a good dunking.

This smartwatch family comes with a very nice wireless charger, similar to the one used by Motorola for its 360 watch, and uses a 250mAh battery--which lasts a day or two, depending on usage.

Absolutely the cleverest thing about the Gear S2 is its rotating bezel. You just twirl it with half a finger and you can now navigate around the watch and apps. It's so intuitive and easy to use, this rotating part, that it could be the deciding factor for many who are looking to buy a smartwatch.

The Moto 360 is also awfully pretty, but its leather straps are really prone to wear and tear, and one doesn't easily find replacements to swap them out. The 360 is also quite, quite large.

The Asus Zenwatch is real stylish, but doesn't have a heart rate sensor, unlike the other two. 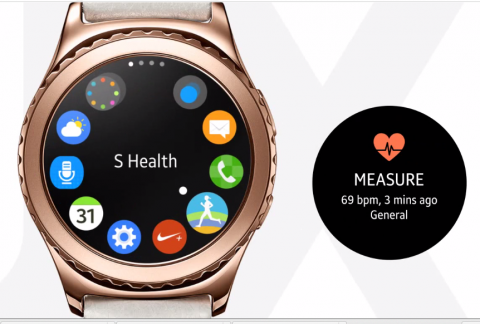 This isn't an Android Wear, but it has some pretty and useful apps that use that rotating selector-bezel nicely

There's also LG's Urbane, which is decidedly manly. Incidentally, if you buy a sporty variant with a silicone strap, you're in business because they clean easily and are sturdy. Plus, the colours always look fresh. 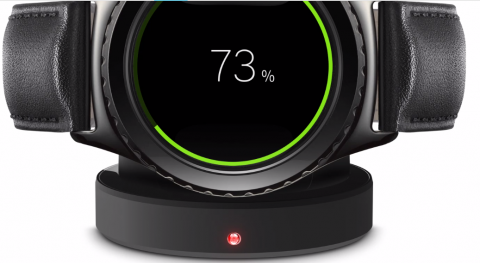 Wireless charging is especially useful with a smartwatch.

Samsung has just given the Gear S2 an infusion of apps. Other than watch faces, which users love, there are games that use the rotating bezel as controller, notes and reminders, and even a YouTube browsing app. This adds to the usual health and fitness tracking, messaging and social media.