...And the sad sub-commentary is that better than spending 24,000 rupees, we can return to reading from paperbacks 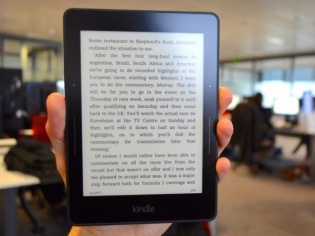 Oh there are hundreds of such. The Kindle Oasis shows you... let me think... The best one ever, from today: Amazon's new Kindle Oasis has leaked: cool battery case, but not waterproof.

Let’s forget that. Books don’t need batteries, and they are (obviously) not waterproof.

And let’s say the best thing that can be said here: Judge not a book by its cover? And has there been a worse example up to this decade, within civilisation, of humanity, judging books by its covers?

But let’s say that again: Do you think you’re getting some little thing (or maybe something major) from an e-book as opposed to a real book?

You’re getting money because it’s cheaper.

You can read it any time with its own light. Why not switch on a “zero-watt” bulb and read your book?

You can read from thousands of titles. Yeah? Tell me, I beg you, which titles do you have?

I can’t go on much longer. I’ll have to quote from TheVerge: “which Amazon claims is 20 percent lighter than past models. As for dimensions, it's 3.4 millimeters at its thinnest point and 8.5 millimeters at its thickest. The difference between those two is quite noticeable. This is definitely the funkiest looking Kindle that Amazon has designed in quite some time.”

Oh God, when we children, when we read books, we read them.

Can you imagine a 1995 child screaming about how bright the light is, how dense the print is, and how thick the book is?

Unless it’s unusually thick like War and Peace, which no-one will read today anyway.