Why Apple should come out with a revolutionary product to get onto the next growth curve. 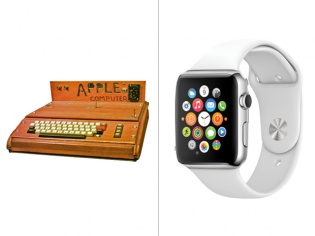 There are only two kinds of gadget users in this world – those who use Apple products and those who do not. The ones that use iPhones, iPads or the MacBook are considered ‘fan boys’ while those who stay away call themselves geeks, because they do not need ‘idiot-proofed’ gadgets.

In the mind of most technology writers, this particular ability to be raved or reviled has been the secret of Apple’s resounding success over years. Each time the company hit the markets with a new product, the world watched. The skeptics remained unconvinced and the fans needed no convincing.

(Watch a video of Apple – Celebrating four decades of ideas, innovation and culture)

To recall the history of what could be described as the true-blue American company, embodying the best and the worst of modern business culture, is a pure waste of time as the story has been immortalized time and time again.

In terms of the product suite, Apple hit pay dirt with their Macintosh brand of personal computers in 1984 after initially pottering around with Apple – I, Apple – II and Lisa. The company dallied with printers, drives, modems, displays and many other devices through the years… (Read: List of Apple products that changed computing) that is till Steve Jobs made a comeback in 1997. What happened thereafter probably defined history.

As the company enters middle, the question uppermost in everyone’s mind is: Is the best behind for Apple or is it yet to come? And, true to form the opinions are divided into a binary format, proving once again that there are only two kinds of people in this world.

1.      Apart from the smart watch, the rest of Apple’s core markets have matured or are gliding towards it

2.      The margin-tightening price reductions may not always work. Apple will have to introduce completely new products into larger markets

3.      Many of Apple’s success stories have been based on redefining existing products. When it comes to new technology markets, the company has little or no track record

4.      In the era of Internet-of-Things, will Apple be able to continue its ‘walled garden’ approach in a global scenario of enterprises seeking to connect millions of products, appliances and services

5.      Product announcements in the post-Steve Jobs era has relied more on incremental development as opposed to revolutionary innovation of the iPhones or the iPads.

1.      Under Jobs, Apple limited itself to a few consumer electronics products. Now, the definition has expanded and so will the company in terms of its offerings for different user types based on social status.

2.      The company’s Project Titan is slated for launch in 2020 and could change the way automobiles are used. Of course, till date one isn’t sure whether the project is about building a car or software to run them.

3.      The company will soon start using up some of its massive USD 160 billion reserves for R&D that could result in opening up of some of its platforms for rivals – especially in the health and home segments.

4.      Two industry verticals that the company is seemingly focusing on include homes and healthcare – both considered to be in the throes of technology revolutions.

5.      Of course, the Apple Watch and Apple TV segments offer tremendous scope over the next ten years that could also witness the company getting into the content field, like Jobs did with Pixar several years ago.

In the ultimate analysis, we believe tech evangelist Guy Kawasaki puts it in perspective. He says that Apple has to come out with a revolutionary product to get onto the next growth curve. The question is can Tim Cook pilot this ride?