On its tenth birthday, stock price is still down, and it's just #77 among the Top100 Android apps in India. But what a powerful medium 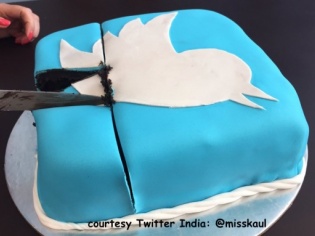 A thank you note has also galvanised users to air their thoughts on Twitter's tenth birthday using a #LoveTwitter hashtag.

The hashtag, incidentally, was something invented by users, not Twitter itself. So was the RT (retweet) and a bunch of other conventions that became signature features.

In the beginning, Twitter was really made by its users with the founders being as surprised as anyone at what the 'microblogging site' really transformed into.

Responsible for bringing people together in revolutions, natural disasters, social causes -- and riots -- Twitter became bigger than anyone ever anticipated. It was all serendipitous because no one could have dreamt of a product like Twitter doing what it has, ten years ago.

It's so powerful today that governments, who at first ridiculed it as a frivolous online time-waster, had to get on the bandwagon themselves and figure out quickly how to use it to their advantage -- as is amply demonstrated by our own Modi government.

How far they've come from the days when they made active fun of Shashi Tharoor for being that "tweeting minister." Now entire political battles are fought on Twitter.

Here's a shock for many (it was for me). On Google's Play Store, ranked by downloads, WhatsApp is #1, Facebook is #3, and Twitter is - believe it or not - all the way down at #77. Yet it has a larger-than-life image, with an influence out of proportion to its size and weight. (Android is over 90% of India's smartphone market, and 85% of the world's, so the Play Store is good enough as a rank of an app's importance in India.)

The number of new users and active users isn't enough for investors to see Twitter as a big enough lure for advertisers and businesses and despite all the tinkering and tweaking that the company has done, this hasn't changed. Even on its birthday, Twitter's stock is down 0.9 percent.

There's enough people who say that you can't compare the two and Twitter will never be Facebook, no matter how many new users join. Its powerful in its own way. On no other network are "Influencers" quite as influential as they are on Twitter, able to sway public opinion and lead national debate where they will.

That's amazing and also frightening. Amazing because no longer are institutions or governments the only ones with a voice to broadcast down to the masses. Frightening because many influencers don't deserve to be any such thing and are there by sheer dint of being able to self-market rather than actually do anything.

It's such influencers who are easily bought by institutions and companies and governments to be their voice for them. Together with paid "trolls" who push the debate sharply and violently in the desired direction, they make up an ugly side to the networking site that no one could have foreseen.

So while we wish the little blue bird a happy tenth, let's be full aware of what this Frankenstein that we created really is.