Home » Features » Meet the LG G5 and its 'Friends'

Meet the LG G5 and its 'Friends' 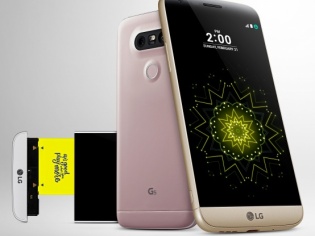 MWC 2016 or the Mobile World Congress has kicked off to a dramatic start in Barcelona, Spain. The other Korean electronics giant, LG, has just showed off its newest version of the LG G-something -- in this case, the LG G5. And they have quite a few reasons to show off.

It isn't just users who are getting sick of seeing the same-old, same-old Android phones everywhere, but the phone makers themselves. So LG has decided to change that by giving the phone user a lot to play with.

The G5 is a nice enough phone to begin with: all metal, bright 2560 x1 440 resolution IPS display, fingerprint sensor on the back, Snapdragon 820 and 4GB RAM to go about everything at top speed, and Android Marshmallow. It's light, bezel-less looking, ergonomically sound and a wonderful 5.3 inches to use one-handed if you should so choose. The display is always-on, showing the clock and notifications without taking too much of a toll on the battery life.

But the big deal is that this phone has "Friends". These are add-ons that plug into the phone at the bottom, and accessories.

At base of the phone, there’s a bit that can be clicked and pulled out. Out comes the 2,800mAh battery. Along with it, you attach the plug-ins, which for now include a Bang & Olufsen module (with a 32-bit DAC and amp) for much, much better music when connected to speakers and headphones, and a camera grip and control module that turns the phone into more of a camera. Add-ons include things like a VR headset.

But LG doesn't want to stop at that and plans to create a whole ecosystem of "Friends," and have a regular party. Great idea, though I'm wondering whether we're going to have to carry a phone-bag just as some people have camera bags.

Talking of cameras, let's talk cameras. The G5 has a set of dual cameras on the back. These are 16MP and 8MP but they do some nice trickery with photos by stitching them together and one of the lenses gives a 135-degree wide angle view. You can use the lenses together or separately.

The VR headset, debuted along with the G5, plugs into the phone, but has its own screen. So you don't go sticking the phone into a big contraption as with the Google Cardboard. This makes the gadget more sleek and wearable.

LG's top-end devices have been a little more expensive than users have been willing to accept in India, so it will be interesting to see what happens with the G5.