It isn’t killing us with excitement yet, but the thin 4K TVs, displays, wearables, car-tech and drones are cool. Oh, and turntables. The world’s biggest consumer-tech show is on in Las Vegas, but CES 2016 hasn’t thrilled us yet with earth-shaking products.

I know, it’s getting tougher to do that, with launches happening round the year. Which vendor wants to hoard up and delay new phone or tablet launches for a full year?

There are many new-ish products though, from a gimmicky Samsung fridge (with a giant touchscreen that looks like a very big Android phone) to drones, virtual reality headsets, smart home gadgets, and lots of USB-C ports all over phones and devices.

From the large pool of middling-to-meh products, and few gadgets and tech stood out. Here’s my pick of the top five.

TVs and displays: 4K is everywhere. Yep, it’s kinda mainstream, though I’d wait for it to flood all major sports-event telecasts this year. There’s probably no TV gadget at CES without 4K. There are a few 8K TVs too, though it’s very early days for that. LG also has a wide range of displays on show: a rollable 18" OLED you can roll up like a large sheet of paper, a 55" paper-thin OLED TV, a double-sided 55" OLED panel (with different images on each side), a 25" curved LCD for car interiors. Oh, and Samsung says its new TVs will double up as hubs for the Internet of Things around the home. 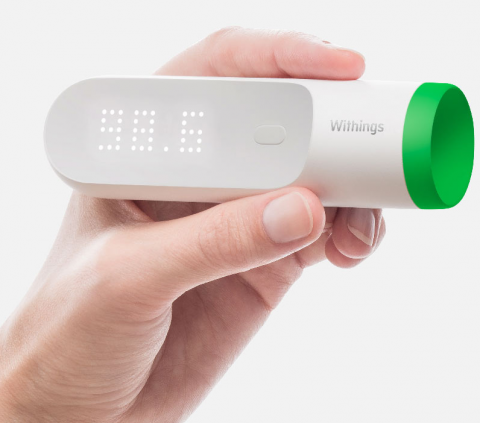 Healthcare products: The $100 Withings 'Thermo' ultra-fast Wi-Fi thermometer (see photo above) promises “one of the fastest, most accurate temperature readings” ever. It uses 16 IR sensors to measure temperature off the artery on the side of your forehead, taking 4,000 measurements in two seconds, correcting for ambient temperature, and also relaying the final reading to an iOS app over Bluetooth or Wi-Fi. So you can track you kid’s temperature over time, and share the data with her doctor.  The app also supports other products from the same company, like the Pulse Activity Tracker.

Wearables: Plenty of wearable tech on show, from Huawei, Misfit, Withings, and, of course, Fitbit, with the new $200 Blaze smartwatch (see lead photo). Unhappily for Fitbit, investors hated the idea of crashing prices to fight competition, and Fitbit share value crashed nearly 20% shortly after the launch on January 5. Then there’s the delightfully gimmicky OMbra, “the worlds's first smart bra”, from OMsignal, which brings biometrics to an undergarment. The $150 bra is likely to ship in a few months.

Cars and car tech: Faraday Future, a little-known California car-maker backed by Chinese investors, showed off the FFZero1, its first concept car, a sleek single-seat all-electric sportscar that could touch 1,000 bhp. The actual production version, though, is likely to be more ‘conventional’. But bigger impact could come from Nvidia’s new Drive PX2 ‘supercomputer for cars’. The little water-cooled lunchbox packs 12 CPU cores, and its 8 teraflops rivals the power of 150 MacBook Pros.  Add some cameras and hardware, and turn your car into a self-driving one. Well, not that easy, but Volvo will release 100 luxury SUVs with DRIVE PX 2 technology next year. And yes, you’ll get a 360-degree view around the car, because “The rear-view mirror is history.” Turntables: As vinyl record sales have been rising in the US, the Japanese are going retro, sort of. First at CES 2016 came Panasonic’s Technics SL-1200 turntable (see photo above), and now we have Sony’s spanking new PS-HX500 turntable—the latter with a USB port focused on ripping from vinyl to Hi-Res audio files, (24-bit WAV or Sony's own DSD format). Sort of like moving from LPs to the high-res future of audio, skipping the MP3 era completely.

And finally, some news we’re waiting for, but haven’t got yet: Netflix in India. America’s top on-demand streaming media company is likely to announce its India entry at CES this week, partnering with a telco (Reliance Jio, perhaps?) to stream content over 4G. Netflix is very popular in the US, and its $9 monthly fee there could be a lot lower for India, though without special packages the use of video over mobile data is a non-starter here. But hey, this launch could shake up the dull and dreary video content market in India. Watch this space.