And if it does, should it be banned in India? What are the options? 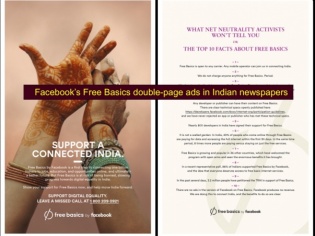 What is Free Basics?
It’s the mobile app for Facebook’s internet.org partnership that offers users free mobile data access to select services on its partner operators, which is Reliance (RCom) in India. Users of Reliance can access Facebook, and other supported services, with zero data charges (making Free Basics a zero-rating platform). Facebook has been lobbying for Free Basics in India via a media campaign (see image) that some estimate may have touched Rs 100 crore.

What is Net Neutrality?
Treating all sites and services equally. ISPs should allow access to all content, without favoring or blocking specific services, websites or apps.

Does Free Basics violate Net Neutrality?
Free Basics promotes free access to a few hand-picked services, potentially discriminating against those not in the partner list (including Facebook rivals). Going by the definition of net neutrality, Free Basics does violate it.

But Facebook says it’s for Net Neutrality
Everyone is “pro net neutrality”.  Facebook, Airtel and other operators, they all say they support net neutrality; they would be silly to say otherwise. But they also say that that zero rating does not violate net neutrality, that India needs zero rating to provide free internet to the millions, and that ‘some access is better than no access’.

Is ‘some access better than no access’?
That’s Facebook’s stand. Activists of SaveTheInternet agree, but point out that ‘some access’ could also mean cheaper or free access that may be slower (some operators offer that), or access for some parts of the day or week--rather than ‘zero rated’ access only to a few sites that are partners of Facebook.

Is Free Basics still running?
As of December 2015, Free Basics has been put on hold via a TRAI directive, after strong net neutrality concerns and protests.

What is zero-rating?
Also called toll-free data or sponsored data, zero rating is when operators charge you zero (no charge) for data only for specific applications or services. Airtel Zero was one such offering, now withdrawn: no data charges if users accessed Flipkart and a few other partner services on Airtel. Facebook’s Free Basics is another zero rating platform.

With which Indian operators does Facebook have a zero-rating deal?
Facebook’s partner for Free Basics is Reliance Communications, an offering that is now on hold after a TRAI directive. But it has been testing the waters with other operators. If you use Facebook on Airtel, you see a message ‘Free Facebook on Airtel’ , and if you click on an external link (say YouTube) within Facebook, a message tells you that you’re leaving the ‘free zone’ and will be charged for data. This is a zero-rating deal.

How big is Facebook in India?
Of India’s 300 million mobile internet users (TRAI Nov 2015; data for June 2015), 56% of users use WhatsApp every day, 51% use Facebook (including the non-smartphone Facebook For Every Phone), said an October 2015 study by research firm TNS. So Facebook’s two apps (WhatsApp is also owned by Facebook) are a huge driver for internet adoption in India. 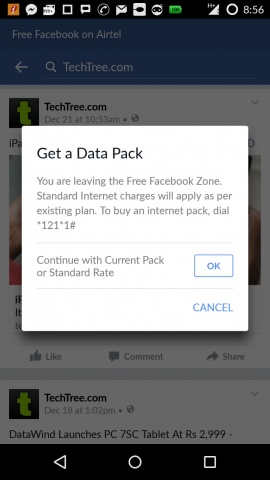 Should Free Basics be banned? Are there options?
In a democracy, bans should be reserved for ‘rarest of rare’ extremes.  A better option is strong regulatory oversight to ensure technical compliance (no throttling, etc) and transparency in partner signup (including allowing rival services to use the platform). And expect and encourage market forces to rule: competitive offerings from other operators, not just other zero rating platforms but free or very low cost, slower data offerings, or ‘free data recharge’ apps like Gigato.

The author is Head, Trivone Media, and chief editor of TechTree.