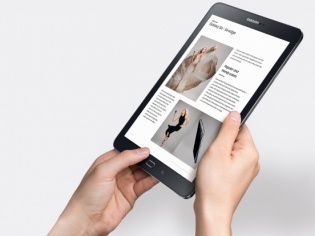 Would you believe it, the Tab S2 is thinner and lighter than the iPad Air? It isn't made of aluminium like the iPad, of course, and Samsung scrimped a bit on the battery. But so what. This 9.7-inch tablet is so comfortable to hold, you can read, browse, and do whatever practically all day. I used it to read entire books, plus catch up with news, surf the web and more.

The screen is brilliant. It's a Super AMOLED 1536 x 2048 display with about 264 pixels per inch. It's bright and vivid, though because I used the tablet for hours, I ended up using a blue-light filter app. With this, it became a great content consumption gadget for me. I filled it right up with news-reading apps, which didn't slow it down any. Lie back against a bunch of plump pillows and read the day away -- that's what this light tablet is great for.

If you insist on working, you can use a Bluetooth keyboard, which will set you up for writing, email, presentations etc, but for any tablet, there just isn't the heavyweight full-featured software you get on PCs.

I didn't find I needed to worry about what would power the screen through all my usage. The Tab S2 has an octa-core Samsung Exynos processor, with one set of cores running at 1.3GHz and another at 1.9GHz. It's got 3GB of RAM to work with. There's 32GB of internal storage plus a microSD card slot. You also have a SIM slot and can use the tablet to call. It does support 4G as well.

This Tab S2 ships with Android 5.0.2 -- and I've never yet seen a Samsung device being in a hurry to update to the next version of Android so don't hold your breath.

The cameras, 8MP and 2.1MP are about what they are on tablets -- on the better side, actually. The battery is a 5,870mAh and really could have been better performer, but I found it good enough if not quite iPad Air grade. There's also a fingerprint sensor that works very well.

So that's a lot of stuff packaged into one Rs 35,800 tablet. Keep your eye out for deals or price drops.

And how’s it compare with the iPad Air 2, other than being a bit thinner and lighter? It’s very similar in hardware terms, so might really have to decide based on iOS vs Android. And yes, the iPad Air 2’s battery (7,340mAh) lasts ten hours, as against the Galaxy Tab S2’s 6 to 7 hours (5,870mAh).

At the end of the day, it may come down to software. While the iPad Air 2 comes pre-loaded with iOS 9, the Galaxy Tab S2 comes with Android’s 5.0.2 Lollipop OS.

(The author is a corporate consultant who likes her gadgets almost more than her shoes. Write to her at raylila@outlook.com)