Home » Features » Why TRAI Put The Brakes On Free Basics

Why TRAI Put The Brakes On Free Basics 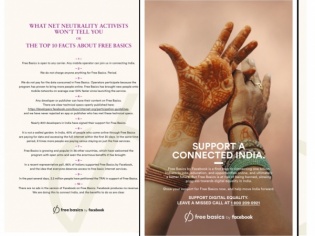 Prime Minister Narendra Modi may have hugged Facebook founder Mark Zuckerberg during the latter’s much-publicised India visit, but India’s telecom regulator is far from embracing his company’s ‘Free Basics’ program, aimed ostensibly at providing free Internet in the country for services that sign on. And backed now by one of the most expensive newspaper ad campaigns in Indian tech history (double-page ads in all leading papers for several days: see image alongside).

The Telecom Regulatory Authority of India (TRAI) has asked Facebook’s Indian partner Reliance Communications to halt the program over concerns that it violates the tenets of net neutrality.  This is after Facebook’s campaign to drum up support by prompting Facebook users to "send a message to TRAI and tell them that you support Free Basics in India."

Under the ‘Free Basics’ program, users (ostensibly, economically weaker sections of society) will be given free internet with access to pre-selected websites and services such as online shopping, health and news and current affairs. Access would come through a Facebook-branded portal, but could also be availably invisibly to, say, an Airtel user simply using Facebook.

Facebook’s first and till now only operator for its Free Basics offering is Reliance Communications, but it has been doing limited pilots with others. Airtel users have been seeing messages showing that Facebook is free on Airtel mobile data  (until you click a YouTube or other media link that takes you outside Facebook).

A report in the Times of India quoting unnamed government sources said the Free Basics program would be paused till such time as TRAI handles the net neutrality issues. The question being asked now relates to the fairness of allowing a telecom operator to have differential pricing for different kinds of content.

The official goes on to add that Reliance Communications has given a compliance report stating that the program has been stopped. Earlier this month, Facebook had sent out notification to its users urging them to sign an online petition to TRAI asking it to save the program.

Facebook also came in for criticism in the United States for seeking support for its India program using the same means. Later, officials in the company attempted to sweep the mess under the carpet by suggesting that they had ‘erroneously turned on the notification’ for US users due to a coding error. But as net neutrality activists point out, TRAI would have no way of knowing which of the potentially millions of “support letters” came from US or non-Indian users.

While the debate continues in government circles, Indian industry has now joined issues with Facebook suggesting that the ‘Free Basics’ program was contrary to the net neutrality idea. A report published in the Business Standard newspaper (Full Report) quotes Vijay Shekhar Sharma, founder of PayTM as saying “Oh my fellow Indians, either choose this or do a jihad for independent Internet later or pick net neutrality today.”

"People are being tricked into supporting Free Basics under the guise of digital equality," wrote Amol Malviya, former chief technology officer at Flipkart, India's largest e-commerce firm, on his blog. "Notice the language on the page? It makes any critic of Free Basics appear to be an enemy of digital equality. People will listen to the critics' arguments much lesser when there's a question mark on their intent,” he says. On its part, Facebook has launched a campaign to save the program. It says “This campaign gives people the opportunity to support digital equality in India," Facebook said in a statement on its Save Free Basics campaign. We are committed to Free Basics and to working with Reliance and the relevant authorities to help people in India get connected."