Here&#039;s What You Can Expect From The Latest Windows 10 Update | TechTree.com

Here's What You Can Expect From The Latest Windows 10 Update

This is the first major update bringing in a lot of features to the Windows 10 devices. 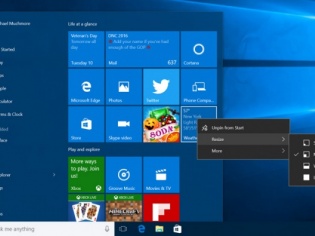 We all know that Microsoft will be rolling out incremental updates for Windows 10 instead of coming out with a major update every few years.

So, here is its first significant update which is also known as November update or Threshold 2.

While the update is basically full of fixes and performance improvement, there are quite a few notable features that definitely makes working on Windows 10 more easier.

While the Windows 10 is known for its innovative tiled start menu, the latest update brings with it an option to increase the Start menu's tile sections to four, medium-square tiles across. You can also resize the tiles fairly easily. Windows 10's new web browser Edge gets a whole lot of updated features with the latest update. You can now sync for Favourites and Reading List items, support for more standards, cast media to a display or HDTV and new improved tab preview, to name a few. While Cortana is always known to be very helpful for the users, now, with this update, she can even make Uber reservations and also recognise dates and time from handwritten inputs. She can also be invoked from with a PDF page in the Edge Web browser. With this update, Cortana will also be making her India debut.

Among these improvements, the new update is also said to improve the boot time to up to 30 per cent faster than Windows 7.

While we all know that Windows 10 devices are capable of automatically installing updates by default. However, if you have ever changed the settings, you will have to manually install the update by selecting 'Advanced Options' in the 'Windows Update' under 'Update & Security'. You can find this in 'Settings' menu after you click on the 'Start' button.