Great sound in smart little packages that connect easily into a multi-room network, but pricey. 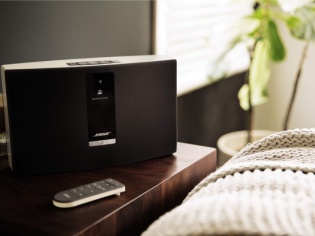 Bose has refreshed its SoundTouch lineup of compact audio systems, with a launch in Gurgaon today of an all-new SoundTouch 10 speaker (Rs 19k), and updated versions of its SoundTouch 20 and 30 systems, among other products.

What’s new? First, all of them now have Bluetooth built in, apart from Wi-Fi, which this series already had (but now it’s dual-band, 802.11n Wi-Fi).

Bose’s compact SoundLink portable speakers have always had Bluetooth, but no Wi-Fi (and those have also had rechargeable batteries). And its SouthTouch systems had Wi-Fi, but no Bluetooth. Why? Few outside Bose know. But like Apple, Bose is not unknown for leaving out features common in the category, and adding them in later models.

Bose now adds Bluetooth its SoundTouch speakers which connect easily on Wi-Fi into a multi-room network. On the far right is the new SoundTouch 10

The SoundTouch line of compact speakers systems, like the pioneering (and competing) Sonos systems, had only Wi-Fi, letting you connect several speakers into a multi-room network, and control them with an iPad or smartphone app. Now, you (or your guest) can quickly connect a phone to any one speaker.

There’s also Spotify Connect integration into the speaker, and Spotify is added onto the SoundTouch app, along with Pandora, Deezer and other subscription services.

These Bose systems are expensive, especially compared with their US prices. The SoundTouch 10 is $199 in the US and Rs 19,013 here, converting the US dollar at over Rs 95. The SoundTouch 20 series III (bigger, louder but otherwise similar to the SoundTouch 10) is Rs 33,638, and the SoundTouch 30 Series III is a very stiff Rs 57,263--but it does fill a very large room with great sound and impressive bass.

Bose also launched several home theater systems ‘starting at Rs 110,000’)--the SoundTouch 120 and 130 systems, and the 5.1 SoundTouch 520, which largely fall into the “if you have to ask the price you can’t afford it” category.

And finally, almost as an afterthought (they left it out of the release) came the update of its ageing but still brilliant Wave Music System SoundTouch. It’s the same old distinctive WMS sitting on a SoundTouch module that they launched in 2014, but now it’s a bit smarter,  has a blue display, and Bluetooth. The ageing but still brilliant Wave Music System, refreshed last year with the SoundTouch module base, gets a facelift and a stiff, Rs 50k pricetag

The WMS SoundTouch bundle costs a stiff Rs 50,513, way more than the Rs 33,000 or so I had paid for my Wave Music System several years ago. The WMS is brilliant, flexible, and still one Bose’s most popular systems, with its only downside being a rather susceptible-to-Indian-dust CD drive, no DVD support, and the scary pricetag.