An excellent Windows 8 tablet that looks good and works well. 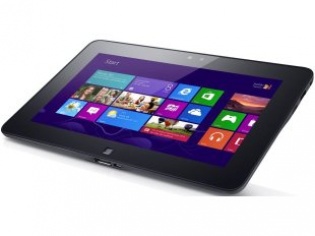 When Windows 8 was launched, it was immediately known that this OS is best suited for touchscreen devices and such devices could only mean tablets at that time. However, things changed as laptops with touchscreens emerged, or tablets that pretended to be laptops. However, today we have got our hands on the Dell Latitude 10, which is a tablet and it doesn't pretend to be anything else. Powered by the Intel Atom processor, this lightweight device seems to be promising with its impressive design and build quality. Let's see how it fares in our complete review. The Latitude series from Dell traditionally caters to business users and the Latitude 10 is not an exception to that rule. That being said, it still has looks that will appeal to the general consumer. The tablet sports an all-black colour theme with a chassis that has a rubberised finish. This finish allows the user to get a firm grip and thus reduces the chances of the tablet accidentally slipping from the hands and falling to its doom. Thankfully, the bad characteristics associated with such rubberised finish (we mean particles and dust sticking to it) are not encountered in this case. While it appears that the chassis is made of polymer, Dell mentions that it is reinforced by a magnesium alloy frame although no metallic part is visible from any direction. The overall build appears to be really solid with no moving parts or any noticeable creaking.

It features a 10.1" LED-backlit IPS panel with HD pixel dimensions of 1366x768, capable of natively displaying 720p content. The screen has capacitive 5-point multitouch capability. It is protected against scratches by Corning Gorilla Glass that literally stretches from edge to edge and imparts it a stylish look. A 2 MP front camera is integrated at the centre of the top bezel for video chatting, just besides an ambient light sensor that automatically controls screen brightness by default. A physical Windows button is present at the centre of the bottom bezel. The tablet sports dimensions of 10.8" (w) x 6.9" (d) x 0.41" (10.5 mm) (h) and weighs 0.65 kg, making it quite portable. An 8 MP snapper with LED flash is present on the rear of the device, although we find it ridiculous for tablets to even have cameras for anything other than video chat. One of the easily noticeable features is that the battery is removable. The flat rectangular battery that fits flush into a groove at the centre of the rear side of the tablet has dimensions of 9.4" x 3.4" and is just a little more than 5 mm in thickness. This is a 30 Wh Lithium ion rechargeable battery with two cells and you can opt for one with four cells for a longer battery backup. Incidentally, this is the only tablet we have come across so far with a replaceable battery and we think it is a good option for the consumer. A set of stereo speakers are present near the lower left and right corners behind grills. There is no separate ventilation grill in this tablet leading us to believe that Dell must have adequately taken care of the cooling, thus not requiring such an arrangement. The power button is present on top with a white LED indicator beside it. A smaller button beside this one is the display orientation lock. There is also a slot for Secure Digital (SD) cards, followed by two pores beneath, which are two noise reduction array microphones for stereo audio; besides input for voice chat and for recording.

A mini-HDMI port is situated on the left to take the action to a larger display. One USB 2.0 port is also present besides it, followed by a headphone/microphone combo 3.5 mm socket that is compatible with most mobile phone handsfree with 3.5 mm jacks.

A Kensington lock to secure the laptop against theft and a volume rocker is present on the right side.

A dock connector is present at the bottom to connect to a keyboard dock that can be purchased separately. This also works as a connector for the included power adapter. There is also a micro-USB charging port, although it works with only a special charger from the company due to the charging requirements of 19 V and 1.58 V that cannot be met by conventional USB chargers.

A Wacom Active Stylus is provided separately for digital pen input. This is like a normal pen that can be attached to your pocket, rather than something that is embedded in the tablet itself as is the case with other manufacturers. Thus, you are more likely to forget to take it along or lose it.

The tablet is powered by the Intel Atom Z2760 dual-core Hyperthreaded CPU running at 1.8 GHz and 2 GB of 800 MHz DDR2 RAM. This allows you to run four simultaneous threads that should aid in multitasking. As you may already know, this CPU is Intel's answer to the ARM CPU in competing Windows RT tablets. The good thing is that this CPU is just as good or even better and you get the full Windows 8 OS. However, Windows RT tablets have a distinct advantage of getting MS Office for free. In the Latitude 10, you only get a trial version of MS Office 2010, thus requiring you to purchase it eventually or opt for a freeware, but less featured option.

Since the CPU is 32-bit, it can only run a 32-bit OS. Also, the maximum amount of RAM that it can address is restricted to 3.2 GB. In this case, these facts don't really matter because the 32-bit Windows 8 (compatible with x86 legacy applications) is adequate for anything that can be done with this low-powered CPU, while the 2 GB RAM is not upgradeable at all.

The 64 GB flash memory has around 36 GB free space, while the rest is gobbled up by the OS and other software, not to mention that around 6 GB is also taken up by the recovery partitions. You shouldn't run out of free space as you may not install large software packages on this tablet, but you may need to watch out if you tend to dump HD movies. In that case, the SD card slot comes handy as you can put such content over there.

Wireless connectivity options present in this tablet are Wi-Fi 802.11 a/b/g/n and Bluetooth 4.0. The Device Manager indicated the presence of a "Broadcom GNSS Geolocation Sensor", which is a GPS sensor, but the Latitude 10 was unable to pinpoint its location (it homed in on Delhi when we tried to get it to show its location, while we were in Mumbai).

The device also incorporates the Trusted Platform Module (TPM) 1.2 chip that protects your data against theft. Computrace technology allows the device to be traced and retrieved in case it is lost or stolen.

The screen is really bright and has good viewing angles. Even though it is glossy, it is very visible and usable outdoors. The multitouch capacitive screen is very responsive and lag-free. Slight trailing is visible, though, especially while scrolling across the tiles in the Modern UI.

During movie playback, the aforementioned trailing wasn't visible. The speakers are pretty loud enough, so you will not have to plug in headphones. The tablet is powerful enough to play 1080p movies encoded at high bitrates without any stutter or lag.

Since it doesn't come with a keyboard, you have to use the on-screen version. We normally don't use this keyboard, but tried to use it this time around. It works very well indeed and offers three different layouts: normal QWERTY that is similar to a standard laptop keyboard layout, split mode with alphabets grouped to the left and right with a central grouping for the numeric keypad, and the third one for handwriting input. The stylus can be used for various functions including handwriting input and the tablet is very good at translating handwriting into text even without any training.

We ran a few performance tests on the Dell Latitude 10 for the sake of comparison with other such devices. The results show that it is somewhat faster than the Acer Iconia W510 with similar specifications. The tablet does seem to slow down when taxed with extensive multitasking (such as several tabs opened in a browser, antivirus running in the background, and a photo editing application open, all at the same time). However, we think such scenarios are less likely to be encountered because tablets are generally used for content consumption, rather than content creation.

During the entire run of the benchmark and testing process, the tablet became only slightly warm, while it remained cool during regular usage.

We measured the battery life by running Battery Eater Pro and by actually using the device with the High Performance power scheme of Windows 8. The two tests run in Battery Eater Pro utility are the Reader's test which simulates real-world reading scenario, while the Classic test uses OpenGL rendering to simulate heavy usage such as gaming.

The battery backup was found to be 4 hours 40 minutes when using the Classic test, while it worked for 6 hours 30 minutes in the Reader's test. When operated in the power saving scheme, the tablet could push to around 7 hours, which is not quite good for a 10.1" tablet.

The Dell Latitude 10 seems to be a very viable alternative to Microsoft's Surface RT tablet with a similar pricing and features. The Intel Atom Z2760 CPU should prove to be a worthy competitor to the ARM CPU in the latter by performing better and also by consuming less battery power, making this a good device to be carried around. The overall performance is good, although there is some slowdown while extensively multitasking. The screen is bright and has a great response to finger touch. The stylus is a bonus input device. For Rs 1500 more, you can get a 4-cell battery that can literally double the battery backup. Add a docking station at Rs 10,000 and a keyboard for Rs 1500 and you raise the productivity of this device to a whole new level. Priced at Rs 36,000, this is the cheapest Windows 8 device we have reviewed, and its looks and build grant it good value for money, thus making it a good buy.