Review: NXG Xtab A10 Plus

The best budget tablet around just got even better. 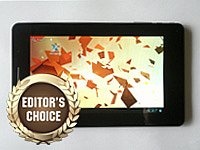 
A couple months ago, we were blown away by NXG's entry-level tablet, the Xtab A10. Its affordable price tag made sure that no rival can beat it in terms of price-to-performance ratio. This time around, the manufacturer is offering a better screen and faster performance with its Xtab 10 Plus. Of course, that hikes up a few thousand bucks in its price tag. Let's find out if this new offering manages to strike a fine balance between price and performance, just like its predecessor.


Design And Build Quality
The retail box includes the tablet, USB cable, and charger. The gadget measures 7.7" (l) x 4.8" (w) x 0.3" (8 mm) (d), and tips the scales at 271 grammes. It's worth noting that NXG has done a great job at delivering a slim profile. Also, it's hard to find such lightweight tablets at this price point. The build quality is good too, and the icing on the cake is the brushed metal finish on its rear. In the Xtab A 10's review, I had pointed out the screen's poor viewing angles. Thankfully, the manufacturer has addressed this issue, by introducing an IPS panel. Not only does this screen provide wide viewing angles, but also offers rich colour reproduction. Additionally, with pixel dimensions of 1024x600, it's one of the most pixel-packed screens you can have under 10k.

The slate is powered by a 1.2 GHz processor, and has 1 GB of RAM. Other specs include:

Similar to its predecessor, the Xtab A10 Plus runs Android 4.0 (Ice Cream Sandwich) out of the box. NXG hasn't customised the UI too much, so the interface is clean. The tablet's hardware is good enough to keep the user experience pleasing. The tablet has a slight amount of lag though, but overall it's still miles ahead of its competitors. I also liked how this tablet's impressive display complements the ICS's looks.

The onboard browser has sleek looks and fast rendering time. Coming to the subject of gaming, the Xtab A10 Plus showed no signs of stutter while playing popular games such as Angry Birds and Fruit Ninja.

The tablet's music player offers a basic UI, but it gets the work done. If paired with decent earphones, the Xtab A10 Plus can offer great sound quality. I also found the onboard speaker louder than any of those found on similarly priced tablets. As usual, you have plethora of equalizer settings and sound effects.

The tablet supports various video formats including DivX, XviD, WMV, and MP4. It had no problem handling 1080p videos. This is impressive, since many of expensive tablets from reputed brands sometime fail to keep up with 1080p videos. Moreover, the presence of an HDMI port means that you can hook it up to HDTVs.

In addition to a front facing camera, NXG has also included a rear 2 MP camera. As expected, the resulting photos are full of noise. In short, the camera is terrible and the lesser said about this feature the better.


Battery And Verdict
The Xtab A10 Plus packs in a 3000 mAh battery, at least that's what the manufacturer claims. Although I can't confirm battery's capacity, I can happily tell you that it's more than enough to keep the device powered on for a day under average use. While playing a 720p video in a constant loop, the battery lasts for almost 5 hours.

Similar to its predecessor, the new Xtab A10 Plus is very well priced. For around Rs. 8000, you get an excellent screen, 1080p video playback, HDMI port, and great sound quality. Although the rear camera is useless, it's added as a token feature. Therefore, if you're looking for an affordable tablet, the Xtab A10 is the way to go.

Firstly, this article does not qualify as a review :( Look at 'gsmarena.com' these guys know what a review is. Secondly, this product totally sucks on 2 counts,misleading specs & terrible after sales support. No wonder then, some reviews & some products are always suspect. It's the prennial Indian 'sab chalta hai' attitude !
Submitted by Sandeep Roy on Tue, 25/09/2012 - 16:04

Myself a good fan of techtree but you should remove this product from top position but its good that you are giving the feedback of the people without any biasing.
Submitted by Ap on Sun, 14/10/2012 - 13:20
News Corner