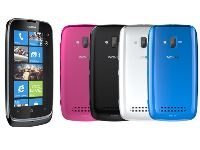 Nokia has launched the Lumia 610, its lowest-priced Windows Phone 7.5 device, in India. Expectedly, this smartphone has lowered specs of an 800 MHz CPU and 256 MB RAM to achieve the target price. However, the other specifications have been maintained at the standard WP7.5 requirement levels, with a 3.7" multi-touch capacitive screen having pixel dimensions of 800x480, 5 mp autofocus camera with LED flash, and 8 GB internal storage. As expected, there is no expandable microSD slot. The phone also supports the Wi-Fi hotspot feature for as many as five users at a time. The Lumia 610 carries an MRP of Rs 13,000, which isn't great value considering its compromised specs.

At the same event, Nokia also announced a Dark Knight Rises Limited Edition version of the Lumia 800. It plans to sell 200 pieces of this smartphone in India, although the pricing has not been announced as yet.