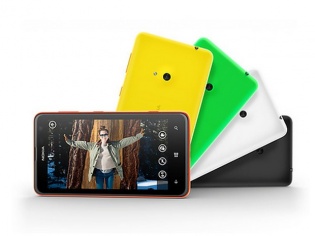 Considering the huge demand for phones with bigger screen size, Nokia has finally released its biggest Lumia so far in India, the 625. It’s a first Windows Phone 8 device from the Finnish manufacturer to sport a 4.7" screen. The phone might attract Android users who believe in “Bigger the better” ideology. But is it a worthy addition to the existing Lumia line-up? Above all, let's find out if it's any better than the relatively cheaper Lumia 720.

Design And Build Quality
As expected, the Lumia 625 has a strong resemblance to the 620’s design language. The 625 is bigger, yet slimmer compared to its predecessor. The phone comes with colourful replaceable outer shells made of translucent polycarbonate. The available colours are red, green, yellow, white, and black. So if you get bored of the existing hue, you can simply buy a new shell and give it a new look. The phone has a matte finish that helps with the grip. The phone doesn't look significantly larger despite the 4.7" screen because Nokia has been smart enough to enlarge the screen by shrinking the bezel at the top. The ensuing lack of symmetry, however, tends to get annoying on account of the unbalanced bezel. While removing the back-panel gives you access to the memory and SIM cards, the battery is not user-replaceable. The button placement is a standard Lumia affair. The Volume rocker, Lock button, and shutter key are on the right side. A 3.5 mm jack is at the top, while the bottom side hosts a micro-USB port. Simply put, the design and construction are bright points for this phone. Display
The 625 sports a 4.7" IPS screen protected by Corning Gorilla Glass 2. The panel’s colour reproduction is quite good. However, since it lacks ClearBlack polarisation filter the blacks aren’t as good as seen on the 620. Like most Nokia smartphones, the screen on the 625 packs in plethora of usability features such as Sunlight Readability Enhancement, High Brightness Mode, and Super Sensitive Touch. However, all these good things are let-down by the pixel dimensions of 480x800 (around 200 ppi). Seriously, why do you behave like a miser when it comes to pixels, Nokia?

Specs
The phone is powered by a Qualcomm Snapdragon S4 chipset with a 1.2 GHz dual-core CPU and Adreno 305 GPU. Other features include a 5 megapixel auto-focus camera with an LED flash, 512 MB of RAM, 8 GB internal storage, and microSD card slot (up to 64 GB). Other than the higher CPU clock speed, the hardware specifications are fairly similar to those of the Lumia 620. To keep the phone powered, there’s a 2000 mAh battery. Full specifications are at the end of this article.

Software
The Lumia 625 features Windows Phone 8 GDR2 (or simply called Amber for Nokia) out of the box. In the latest iteration, the core-UI hasn’t changed. You have customisable Live Tiles with three sizes. As mentioned in earlier reviews, WP8 offers deep social networking integration. Microsoft's Office Suite and SkyDrive integration are useful additions. The Finish manufacturer has also thrown in its exclusive suite of apps that include Nokia Music, Here Maps+, PhotoBeamer, and a plethora of digital camera add-ons. More importantly, since WP8 is well optimised, you won’t notice any lag. Due to 512 MB of RAM about 0.3% of apps won't be compatible with this device. Though 625’s processor has been clocked slightly higher as compared to the 620, in actual usage, you won’t notice much of a difference. Camera
The phone packs in a 5 megapixel camera with an LED flash to keep it company. The phone also comes with Lumia-exclusive lenses such as Cinemagraph, Smart shoot, and Panorama. For those not in the know, check out our tutorial on how to make most of these digital camera lenses. From whatever little time I got to spend with the phone, I can tell that the camera is quite good, but is no match for the one found on the Lumia 720. You can check the untouched sample here.

The Bottom-line
The Lumia 625 is another well-built smartphone from Nokia. Despite going for a relatively larger 4.7" screen, the company has managed to retain single-handed usability. The screen also comes with a fair share of enhancements such as sunlight readability mode and gloves compatibility. However, all this good work has been negated by the low-pixel density.

Mind you, these are my initial impressions of this phone, based on a few hours that I spent playing around with it, and not an in-depth review (which we will be doing shortly). Despite that, I believe I have seen enough to safely answer the question that's on everybody's mind - is the 625 better than the 720 and 820 to justify its Rs 19,000 price tag? The answer is "No”. For 2k less, the Lumia 720 offers a brilliant camera and a much better screen. And for Rs 500 extra, you get the Lumia 820 that has twice the amount of RAM, noticeably better performance, and a quality AMOLED screen. The ideal price should have been between 15 to 16K rupees. Stay tuned for a full review to figure out if the Lumia 625 has more to it than what met my eye the first time around.